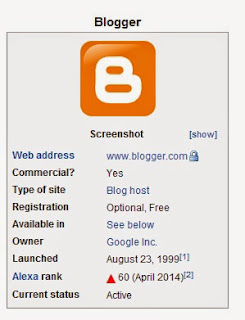 "The bottom line is that blogging is like sex. You can’t fake it. You can’t fake passion. You can’t fake wanting to engage with the public. If you do, it will ultimately be an unsatisfying experience for both blogger and their readers." ~Kevin Anderson, Journalist, Editor for the Guardian, multi-blogger and online expert.

This year  Blogger  is celebrating it's Sweet Sixteen? Happy Sweet 16th to Blogger. Google doodle? If so it will be posted here at a later time. As of March 2015, Blogger ranks 93 on Alexa Internet, Inc. (a wholly owned subsidiary of Amazon.com).

Do you think that blogging is like sex? If so why?

Many who write blogs, do it for the love and the passion they have. Be it for sharing experiences, ideas, etc. True blogging (like true love) is something you simply cannot fake.

Obviously, it's better to refrain from writing blogs (having sex) if doing so out of desperation, which ultimately leads to shallow blogs (cheap, superficial, unfulfilled sex and relationships).

On the positive note, the more one blogs the more one improves just as the more one loves the more meaningful relationships. So the next time you begin writing your blog post, think of all the love and passion you bring.

You might come up with quite a few surprises for yourself and your readers. Go ahead "blog your brains out." #BlogYourBrainsOut

Below is a listing of some interesting postings I've found so far on this topic (note practically all are written by men):


Bloggers main objectives are to write blogs that engage readers. This is the most difficult as it takes creativity, passion, and uniqueness. Unfortunately, writing to become popular or rich and famous compromises a writer's potential. The best blogers are those who write and post to share stories, thoughts, opinions, passions, expertise and perspectives.

The number of bloggers in the U.S. has increased over the past 7 years (2007 to 2014), yet writers who have primary sources of income from blogs are still relatively few in relation to the overall U.S. blogging population. Wolfgangjaegel.com reported an increase of 31% more bloggers in the past three years.

According to "Rise of Blogger" http://wolfgangjaegel.com/rise-of-the-bloggers-blogging-statistics-2014/ "In the past 5 years, blogging has SKYROCKETED and created a living for millions and is an integral part of businesses today."

International Telecommunications UnionTotal worldwide reports that global internet users have increased nearly 3% over the past 3 years -- from 6.9 billion in 2010 to 7.1 billion in 2013 with the largest worldwide subscriptions from Mobile broadband representing a 161% 3 year increase -- from 11.3% in 2010 to 29.5% in 2013. Not surprising, mobile is here to stay.

Below please find a brief Web to Web 2.0 timeline of newsworthy milestones which purport to provide a basic historical and informational chronology from a marketing perspective of the internet:


• 1994 – In January, Jerry Yang and David Filo create "Jerry's Guide to the WWW" while studying at Stanford University and rename it Yahoo in April

• 1999 – Although bookmarking was around earlier, bookmarking became popular in businesses and mainstream during this period

• 1997 – The first blog goes online, known as “weblog” originally used as a niche for geeks; Weblog was coined in December 1997 by Jorn Barger

• 1997 – The phrase “search engine optimization” is mostly likely coined during this period, according to Danny Sullivan of  The New York Times

• 1999 – The first version of RSS feed is created in March by Romanathan V. Guha for use on the My.Netscape.com portal (RSS 0.9)

• 1999 – Blogger  is launched on August 23rd by Pyra Labs. Evan Williams and Megan Hourihan of Pyra Labs, originally created this software with the intention of being an in-house application to integrate project management, contact management and task lists. Blogger becomes available to the public in August but does not become mainstream until later on.

• 2000 – Google reaches the first billion-URL index and earns the reputation of being the largest search engine in the world; Adwords program is launched offering internet pay per click programs; Yahoo selects Google as it's default search results provider

• 2001 – GoTo.com changes their name to Overture (purchased by Yahoo later)

• 2001 – According to MediaPost on August 9, 2001, Jupiter research predicted spending on digital marketing US ad spending would reach $19 billion by 2006

• 2002 – Blogger  is completely rewritten at Prya Labs for licensure for other countries, with Globo company of Brazil becoming the first licensee recipient

• 2002 - Federal Trade Commission (FTC) issues communications about the importance of paid advertising on search engines in response to a complaint from Consumer Advocacy Group, affiliated with Ralph Nader

• 2003 – The second US 3G (3rd generation cellular wireless) Verizon Wireless network operation launches; The first US Monet Mobile Wireless launched and shut down shortly afterwards; Japan, May 2001 and Korea, May 2002, were the first 2 countries to launch 3G operation networks

• 2003 - The Can Spam Act is signed into law on December 16th by President George W. Bush to regulate commercial email and is enforced by the FTC

• 2004 -  Web 2.0 O’Reilly Conference is held on October 5 – 7, 2004 at the Hotel Nikko in San Francisco, CA. Although about16 years into Web 0.0 and 5 years into Web 2.0, we still do not know where it is going; Transformational elements are unknown as Web-Web2.0 are still new and the industry has no idea of what infrastructures will go away. Many innovations with no ads, no subscription feeds, free to the end user, are floating on venture capital. Big issue is these innovations lack business models and it is predicted that many of these web innovations probably will not survive unless purchased, merged, with a larger company, etc.


• 2005 – National Governments all over the world embrace Web 2.0 and create official blogs; Israel is the first country to have a government blog, IsraelPolitik

• 2005 – In December, Microsoft and the Outlook team announce they are using the RSS feed icon which was first used in the Mozilla Firefox Browser

• 2006 – Twitter is launched in October and evolves into a virtual water cooler experience having the power to hold social groups; Users can chat away about what they're doing and if anyone is interested in knowing, they can read, or watch what you’re doing and reply, follow, etc.; E.g., discuss iPhone feature,  communicate with people in different parts of the world separated in space and time; Although it is not the same as face to face it is similar enough to feel some kind of connection to people using twitter, Facebook or Youtube

• 2006 – Search Engine Marketing takes the lead in advertising and grows much faster than traditional advertising and other online marketing channels; US SEM advertising spending reaches approximately $9.4 billion, (a 62% increase over 2005 US spending); Worldwide, US 2006 ad spending had a 38% marketshare of total global internet ad spending calculated at $24.9 billion internet ads invested worldwide in 2006 (an increase of 33% from the previous year’s worldwide ad spending); Interesting to note that Jupiter’s estimate back in August 2001 was off by almost $10.0 billion less than actual of $9.4 billion

• 2007 – October 2007 FriendFeed is created by former Google employees (known as the first lifestreaming service integrating all of your internet activity in your friendfeed nework, can have messages from twitter pulled into friendfeed which generates a lot of discussion in friendfeed and social networking feedback which can lead you to discover other sources of friends with similar interests; If you are traveling and you are in the same location as someone else in your friendfeed network, this can be a useful tool in knowing who in your network is nearby; all different internet activities are funneled into a single place and has a personal view; has the highest level of discussion, can get a huge amount of interaction in friendfeed more than from blogs; can create a room and pull entries from different sources that can create an RSS feed, audio podcasts, etc. used by science publishers, libarians, etc. create customized feeds that can come to you, the individual, on what type of information you want to have delivered to you)

• 2008 – The Dow's biggest one-day drop on September 29, 2008 of 778 points (surpassing the first trading day loss after 9/11), after the rejection of the House bailout plan; According to CNN Money, this drop represents an approximate value loss of $1.2 trillion

• 2009 – The future of blogging is customization and life relevancy; After 16 years after inception, LifeStream  is all the buzz as the next generation of social media. Back in the mid 1990’s, the term LifeStream was originally coined by Eric Freeman and David Gelertner at Yale University to describe a cyber diary of one’s life, streaming all of internet activities in one cohesive lifestream. Now about 15 years later, LifeStreaming, an innovative cyber platform combines all of a individual’s internet activities and information onto a unified platform known as a stream. Addins and plugins are created to help the user to “stream his/her life” and are listed as follows:

• 2012 - Blogger updates signup process ensuring new users are immediately equipped with a Gmail and Google+ account as soon as their Google account has been registered in addition to all of Google activity streamlined -- Blogger now joins YouTube, Docs, Search, Gmail, and Google+ in getting the updated signup flow.

• 2014 - Latest google analytics blog posts http://analytics.blogspot.com/
• 2015 - February 24, 2015, Blogger announced it will no longer allow users as f March to post sexually explicit content (unless the nudity offers "substantial public benefit," for example in "artistic, educational, documentary, or scientific contexts").
• 2015 - February 28, 2015, accounting for severe backlash from long-term bloggers, Blogger reversed its decision on banning sexual content, going back to the previous policy that allowed explicit images and videos if the blog was marked as "adult."
• Other interesting resources:
--- ShoutingBlogger.com "What Is Google Blogger (Blogspot) and "What Are Its Pros and Cons"
--- Wolfgangjaegel, "Rise of the Bloggers - Blogging Statistics 2014"

If you have any comments about Blogger's Sweet 015, don't hesitate to post your comments. Thanks for visiting and again, "Happy Blog Day to you Blogger!" Note, this article is an update from previous annual posts.


Happy Sweet 16th to Blogger is part of the "evergreen marketing insighter" series by Gloria Buono-Daly. This post has been updated from the original post published in August 2009. Copyright (C) 2009.