Google.com becomes abc.xyz and G is for Google 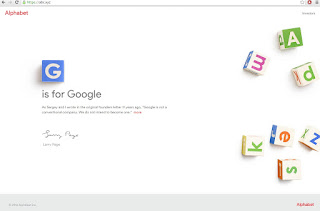 In the new Alphabet world at abc.xyz, G is for Google.

Who would think that the renamed, reorganized, Google corporation, is officially named after a set of 26 letters in fixed order, “Alphabet.” 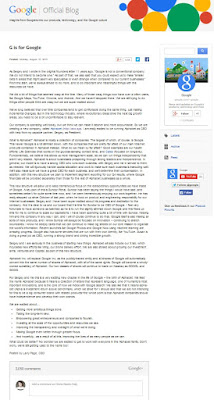 According to a recent blog by Google co-Founder Larry Page,

“What is Alphabet? Alphabet is mostly a collection of companies. The largest of which, of course, is Google. This newer Google is a bit slimmed down, with the companies that are pretty far afield of our main Internet products contained in Alphabet instead … Alphabet is about businesses prospering through strong leaders and independence … For Sergey and me this is a very exciting new chapter in the life of Google -- the birth of Alphabet. We liked the name Alphabet because it means a collection of letters that represent language, one of humanity's most important innovations, and is the core of how we index with Google search!” #GisforGoogle #Alphabet #abc.xyz

REORGANIZATION OF GOOGLE – What does this mean?

Google’s new CEO is Sundar Pichai (formerly Larry Page’s deputy), who according to a recent Bloomberg post, is known as the “most powerful man in mobile.” #GisforGoogle #Alphabet #abc.xyz

RESTRUCTURING OF GOOGLE STOCK – If you own Google’s stock, what will you do?

Apparently this new stock structure has to do with transparency for Google’s investments and the new Alphabet will make future acquisitions much more seemless than before. Do you think this restructuring will shed an entirely new light to disruptive innovation and turn the markets upside down?

According to the company’s recent SEC filing, Alphabet will gradually replace Google as the publicly traded company on the Nasdaq stock exchange. Therefore all shares of Google will convert to shares of Alphabet and will represent the same amount of shares. This merger will most likely occur sometime later this year. #GisforGoogle #Alphabet