This is a reporting of earlier ones with minor edits. Enjoy!

~ Tim Berners-Lee, SirTimothy John Berners-Lee (born 8 June 1955), also known as TimBL, is an English engineer and computer scientist, best known as the inventor of the World Wide Web. He is currently a professor of computer science at the University of Oxford and the Massachusetts Institute of Technology (MIT).  @timberners_lee    https://twitter.com/timberners_lee 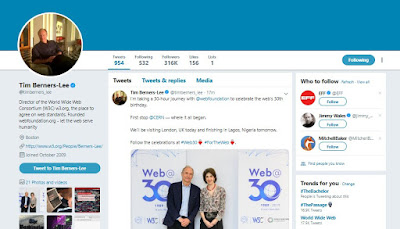 Hard to believe WWW is 31 years, it's done so much and transformed itself so many times one would think it's at least 100.


Oh boy, do I wish it did really serve humanity well. Unfortunately, there's just too much propaganda, bias, control, and greed at the expense of  human rights and democracy. When will this end?


Perhaps it's good intentioned inventor, Tim Berners-Lee can invent an antidote application to counteract this horriffic poison to humanity. If anyone can, I know he can and not just by speaking and advocating but by building something better intended for humanity.

In any event, WWW probably the greatest disruption of the 19th century. 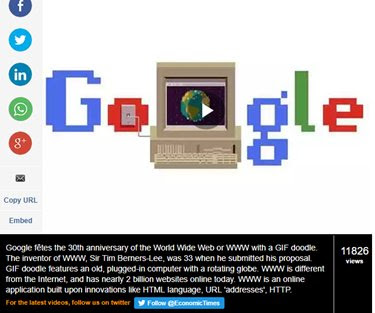 Happy 111th International Women's Day World! This year the theme ~ "An equal world is an enabled world " Tweet #EachforEqual; #IWD2020 throughout your social media. What's your action for equality? Here's mine.

This blog posting is an updated/revised version of articles posted in prior years. Every year I include my action for the current IWD theme.  Have you done this yet? You should.  Enjoy!

“An equal world is an enabled world" 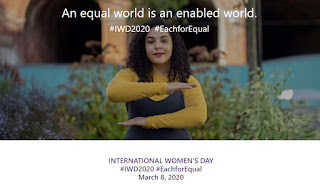 This year, the IWD2020 theme hashtag is #EachforEqual

What are your plans for celebrating women?  Mine is celebrating womens' achievements, gender equality, leadership especially continuing to set examples of advocating awareness against bias, bullying and taking action for equality.

Besides incorporating my social media with hashtags, #EachforEqual; #IWD2020  my action for #IWD2020  #EachforEqual is celebrating womens' achievements, gender equality, and especially leadership in everything I do, setting example, always being kind and respectful, advocating awareness against bias, bullying and ultimately taking action for equality. ~Gloria Buono-Daly  #ThoughtOfTheDay #QuoteOfTheDay

I think of so many things everyone can do such as showing respect, kindness - be it with family, workplace, etc. Promoting integrity and leadership - by being honest, standing up for what is right, reporting harassment and abuse especially in the workplace, etc.

I also share my thoughts Twitter; This helps me put things into perspective, sort of journal my thoughts but in a different way than journaling. How do you take action for #EachforEqual  #IWD2020?

Below are excerpts from prior annual #IWD blog postings.

International Women's Day has been a focal point for global womens' rights since 1909.

Last year the theme was #BalanceForBetter #IWD2019 and prior to that #PressForProgress #IWD2018.

We are about 190 years away from gender parity. The past several years have been a whirlwind of advocacy and progress for women advocating for reporting sexual abuse, harassment, bullying, regardless of how famous or powerful the attacker is.

Misconduct and harassment are serious issues that come in many different sizes and shapes. It's not just just about sexual harassment by men but by women as well. 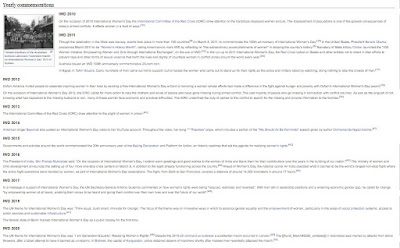 #IWD continues their global message with annual commemorations.  (photo right, lists commemorations of the past decade, 2010-2020)

I find #IWDthemes inspiring and consistently evolve/expand on from prior years.

#IWD2018  theme of the year is for all to #PressForProgress, #IWD2019 theme #BalanceforBetter.

For earlier historical perspective on their commemorations, including UN commemorations from 1996 to present, visit International Women's Day on Wikipedia.or

Finally progress is momentous and significant. Women are becoming stronger all thanks to embracing and supporting each other. Sisterhood, brotherhood, are alive and well.

Gone are the days of women being punished for reporting bad behavior, subterfuge, misconduct or harassment. However we still need to press for  progress more and continue moving forward.

But what about the female or male co-worker at an organization who has been working hard, complying with the company standards of behavior and code of conduct only to be constantly bullied, abused and harassed by a female/male co-worker who feels threatened by his/her business ethics and/orskill set?

What's your #PressForProgress? My action  is to continually speak up when something is wrong,  and be supportive to other women who are being harmed and/or harassed. I want to keep on "pressing" to be the best I can be in everything I do, to exercise leadership actions in my life (i.e., personal, at work, communications including my blog posts, etc.) and to always respect and celebrate differences for the good of all people and of course for our goal of increasing Gender Parity even though we are 200 years away. Also press progress by encouraging others to #PRESSFORPROGRESS.


Equally important is for women at work. If a new employee at an organization however small or however large, is being harassed by another women who believes she is above the company policy and standards of behavior/code of conduct because of her 30 or so years of tenure, and constantly harms/harasses, belittles, you or others, etc.,  report it! Regardless of the consequences. Victims have rights and must be protected from employees who behave like goons and street gangsters inside the profit or non-profit organization.

WHAT'S YOUR ACTION FOR IWD2018?  #WhatsYourAction    Please share your #PRESSFORPROGRESS at this link   #IWD2018

One of my favorite quotes by women:

“If particular care and attention is not paid to the ladies, we are determined to forment a rebellion and will not hold ourselves bound by any laws in which we have no voice or representation.”    ~~ Abigail Adams,  U.S. First Lady, 1776 (née Smith; November 22 [O.S. November 11] 1744 – October 28, 1818) was the wife of John Adams, the first Vice President, and second President, of the United States, and the mother of John Quincy Adams, the sixth President.

As soon as Google doodle is posted, if it's IWD2018 related, I will update here.

With  the #IWD2018 theme, PressForProgress #PressForProgress, Google's doodle for this year is charming and filled with various themes and #HerStory about various professional women all over the world!

This post will be a good bookmark as it will add all doodle images dedicated to International Women's Day event, March 8th. We have them listed as far back as 2011 which marked IWDs 100th anniversary (scroll below if interested in viewing commemorative 100th IWD doodle).


Below please find the doodle from #IWD2017. The theme was "Be Bold For Action." The doodle depicted a collage of various women all over the world who soared leaps and bounds in medicine, sports, academia, aviation, and sciences to adventure, arts, entertainment, activism, and technology.

In 2015, Google celebrated with the inspiring and engaging doodle below for IWD2015:

Posted by Gloria Buono-Daly at 10:31 AM No comments: