My Little Quote for the Little Black Book of Career Advice

"Business, like life, isn't always fair. Whether on the job, volunteer assignment, whatever, I believe there will be situations when office politics or economic conditions just might attempt to compromise integrity, talent and career potential. Sometimes, we will need to burn those faulty infrastructural bridges in order to build greater ones to redirect your career path. Success is NOT about fitting in, popularity, or having the highest title or salary. Success is all about standing true to yourself and the accomplishments you achieve amidst all those obstacles along the way. So go ahead, change course, and don't forget to enjoy the ride!" -- Gloria Buono-Daly

I would often wonder if I was the only person who ever imagined that directing one's career sometimes required breaking those darn, dysfunctional, ties. Why kid yourself? I quickly learned that many coaches, HR experts and top leaders share this sentiment. We can't all be blinded by that very, old, cliche, intended for the docile masses in the workplace -- "don't burn bridges." I'll leave with where I started, "business, like life is unfair," but goes on. We all win when we continue to redirect and reinvent ourselves even if we happen to burn a few. Share your own career wit and wisdom quote by visiting
◄►Little Black Book◄► 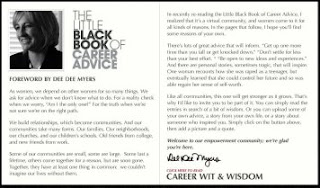 By the way, Dee Dee Myers, the first woman to serve as White House Press Secretary, as well as being the second-youngest press secretary is campaign empowerment ambassador. Myers is also Contributing Editor to Vanity Fair; an analyst for CBS News; popular lecturer on politics, the media and women's issues; and author of the New York Times best selling book Why Women Should Rule the World. To read Myer's celebration of women and to learn more about her visit ◄►Empowerment Journal◄►

You might enjoy reading some career wit & wisdom from many notables including the likes of 2011 Matrix Awards Recipient, Gwen Ifill, and former Matrix Award Honorees and Presenters, Arianna Huffington, and Nora Ephron, etc. 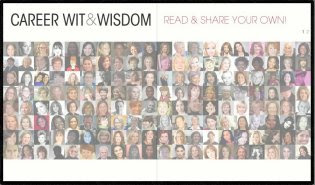 Posted by Gloria Buono-Daly at 9:49 PM No comments:

Would you believe it, today is Twitter's 5th B-Day.

Still no definitive business model or $ profit yet Twitter continues to spread wings and ripple effects! Wishing you many more twitterers, tweets and B-Days!!!

Like many households on Saint Patrick's Day, in the center of our breakfast table you will find tasty, Irish, soda bread to celebrate the luck and charm of the Irish. I baked this easy Irish soda bread earlier today and just had to share my easy recipe by posting on my blogs. The great thing about this is the prep time was slightly less than 5 minutes and it baked in an hour.

Step 2 : Knead Dough (2 min)
► Knead dough and divide the dough into 2 round loaves
► Sprinkle flour if dough is too moist and sticky
► Using a cake knife, mark the top of each dough loaf with an X