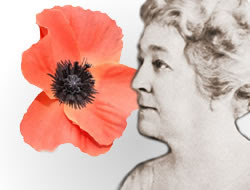 “We cherish too, the Poppy red
That grows on fields where valor led,
It seems to signal to the skies
That blood of heroes never dies."
~~ Moina Michael (aka Poppy Lady)
U.S. professor and humanitarian who vowed to always wear a red poppy as a symbol of remembrance for those who served in the war. In 1915, inspired by the poem "In Flanders Fields," Moina Michael replied with her own poem, We Shall Keep the Faith, November 1918 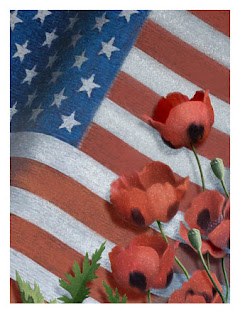 In Flanders Fields by John McCrae
In Flanders Fields the poppies blow,
Between the crosses, row on row,
That mark our place; and in the sky,
The larks, still bravely singing, fly,
Scarce heard amid the guns below.

We are the dead.
Short days ago,
We lived, felt dawn, saw sunset glow,
Loved and were loved and now we lie,
In Flanders Fields.

Take up our quarrel with the foe
To you, from failing hands, we throw,
The torch, be yours to hold it high.
If ye break faith with us, who die,
We shall not sleep, though poppies grow,
In Flanders Fields.

We all seem to forget that we celebrate Memorial Day for the many service members who have lost their lives serving our country. Memorial Day is one of the special times of the year to honor loved ones who have passed and "In Flanders Fields" reminds us of those who have died protecting our country and freedom. 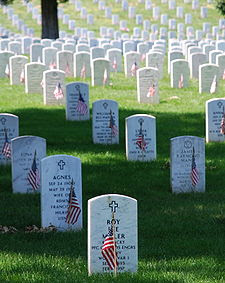 FASHION TRENDS ON MEMORIAL DAY
Memorial day marks the first day of the year for white-wear. The traditional fashion trend, “no white before Memorial Day or after Labor Day” gained popularity as the wealthy began wearing white in the summer. Light clothing was the symbol of leisure and black and navy were always the norm for the working class. This fad continued until years later as many began replacing white pants with the likes of bold solids and floral prints, pastel jungle prints, red jumpsuits, neon pink and cobalt sun dresses.

HISTORY OF MEMORIAL DAY
The first Memorial Day celebration traces back to May 30, 1868. Memorial Day honors men and women who fought for our country so that we can all be free.

Originally coined "Decoration Day," Memorial Day is a day of remembrance for those who have died in our nation's service. Memorial Day is less about barbecues and more about celebrating our nation’s veterans. Don't forget -- raise your flag half-staff -- honor more than one million Americans who gave their lives in service of this country for our freedom. 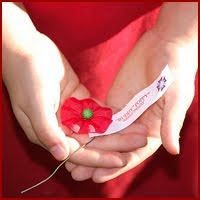 Memorial Day was officially proclaimed on May 5, 1868 by General John Logan, national commander of the Grand Army of the Republic, in his General Order No. 11, and was first observed on May 30, 1868, when flowers were placed on the graves of Union and Confederate soldiers at Arlington National Cemetery. The first state to officially recognize the holiday was New York in 1873. By 1890 it was recognized by all of the northern states.

The South refused to acknowledge the day, honoring their dead on separate days until after World War I (when the holiday changed from honoring just those who died fighting in the Civil War to honoring Americans who died fighting in any war). It is now celebrated in almost every State on the last Monday in May (passed by Congress with the National Holiday Act of 1971 (P.L. 90 - 363) to ensure a three day weekend for Federal holidays), though several southern states have an additional separate day for honoring the Confederate war dead: January 19 in Texas, April 26 in Alabama, Florida, Georgia, and Mississippi; May 10 in South Carolina; and June 3 (Jefferson Davis' birthday) in Louisiana and Tennessee.
Memorial Day Fashion Trends
► Enjoy the Long Weekend with Memorial Day Fashion Finds on Glamour.com http://www.glamour.com/fashion/blogs/dressed/2015/05/memorial-day-fashion-sales-2015
► What To Wear For Every Kind Of Memorial Day Weekend http://www.luckyshops.com/article/memorial-day-outfits
► Do You Have to Wait Until After Memorial Day to Wear White? | http://ksoo.com/do-you-have-to-wait-until-after-memorial-day-to-wear-white/?trackback=tsmclip
► Moina Bell Michael: the Idea for the Flanders Fields Memorial Poppy
Other Resources
►USmemorialday.org
►Memorial Day Calendar
►Memorial Day History
► How to Observe Memorial Day
► Buddy Poppy
► The Story Behind the Poppy
► InflandersFields-YouTube
► InflandersFields-YouTube

Wishing you and yours a wonderful Memorial Day weekend. 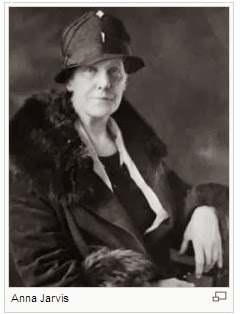 "A printed card means nothing except that you are too lazy to write to the woman who has done more for you than anyone in the world. And candy!

You take a box to Mother—and then eat most of it yourself. A pretty sentiment." ~~ Anna Jarvis, Founder of the Mother's Day holiday in the United States, on the true meaning of mothers. 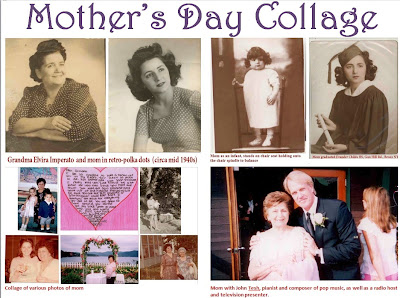 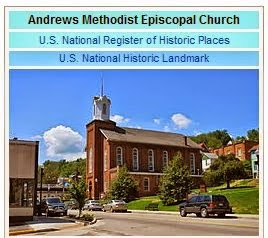 Photo right (courtesy of Wikipedia) of The International Mother's Day Shrine was designated a National Historic Landmark October 5, 1992. The Shrine, constructed in 1873 is located at Andrews Methodist Episcopal Church at 11 E. Main Street in Grafton West Virginia. Andrews Methodist Episcopal Church also called the "mother church" of Mother's Day, was incorporated as the International Mother's Day Shrine on May 15, 1962, as a tribute to all mothers.

Will update Google doodle for this year when ready. In the meantime, enjoy this lovely, bicycle-themed doodle (May 2014).

Below is MD blog post from 2015. Enjoy! Happy 101st Mother's Day America
Mother's Day, this year is Sunday, May 10th and always a great day to celebrate love, friendship and moms.

Did you know that U.S. President Woodrow Wilson in his 1914 presidential proclamation, by the U.S. Congress proclaimed the very first Mother's Day celebration?

Mother's Day was originally created by Anna Marie Jarvis in 1907 when she had a memorial to celebrate her Mother, Ann Jarvis who passed away on May 12, 1905. Anna's mother Ann Jarvis had founded Mothers' Day Work Clubs in five cities to improve sanitary and health conditions. The Mothers' Day Work Clubs also treated wounds, fed, and clothed both Union and Confederate soldiers with neutrality. Anna Marie Jarvis never married and had no children. She and her sister Ellsinore became disappointed with the commercialization of Mother's Day. They spent their family inheritance campaigning against what the holiday had become. Both died in poverty.

Yellow roses are very popular on Mother's Day as they indicate joy, gladness, friendship and "I Care?" Our way of remembering and celebrating is sharing our photo of beautiful bouquet of 2 dozen yellow roses my husband and I presented to our mom in May 2011. And I like to share her special cookie recipe. 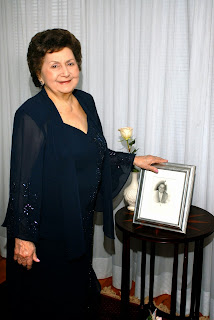 As a child my mother would often bake all sorts of foods, pies, desserts, cakes and cookies. One of my favorite, all time cookies is a famous Italian cookie called "Anginette" (aka Anginetti), in the USA popularly called "Lemon Drop Cookies." The great thing about this cookie is that it is popular all year round and with just a few ingredients, anyone can prepare and bake this great cookie in less than 30 minutes. {Photo left, mother and photo below right me and mom on our Wedding Day, March 2008) 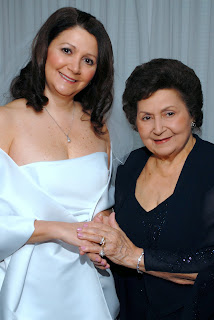 I use to always enjoy rolling the dough into extra long cigar shapes and coiling the cookie into 2 and 3 tiers high with my mother. The sky is the limit in regards to creativity; although Anginetti are delightful plain they are lovely and appetizing garnished with frosting and sprinkles. The prep time including rolling the dough into cigar shapes was slightly less than 15 minutes and it baked in 8 minutes. I try to bake these as much as I can. I once baked Anginettes and decided to bring in a tray for an early meeting where I was leading a direct marketing presentation to a group of about 30 people. The cookies were a big hit as was my presentation. Besides adding a personal touch, they were a surprise breakfast treat especially while sipping coffee and tea.


Step 2 : Knead, Cut & Shape Dough (10 min)
► Knead dough when ready divide into amounts enough to roll into long cigars (about 6" to 8 inches); Then create circular coil shapes. Place in baking tray. Makes about 36 cookies or so depending on shape and size of cookies. You can make many more if you use a simple flat, round conventional shape cookie, but then again, it won't have the look and feel as a true, anginette.

Step 3 : Place tray in 375° oven (8 - 18 min)
► Depending on your oven, bake anywhere from 10to 20 minutes, keep watching and when the cookies are golden brown color on the bottom it is done. If you want to have frosting, mix the powdered sugar and water and stir until paste like. Wait at least 10 minutes for baked cookies to cool and dip cookies into frosting mix, or simply pour a little on each. Should set within 15 minutes. Can serve plain or with the traditional sugar frosting. Be creative, try cutting a few plain ones and adding cream cheese in the middle.
► Don't forget to wait at least 10 minutes before adding the icing and sprinkles or serving without icing.

These cookies are great plain or with icing. There are different textures and styles. The neutral-colored frosting was made using lemon instead of milk with powdered sugar.

“The sweetest sounds to mortals given. Are heard in Mother, Home, and Heaven” -- William Goldsmith Brown (1902-1982);
Survivor of the sinking of the RMS Titanic. Later he wrote a book about his experiences on the ship, and had his story featured in the documentary, Titanic: The Legend Lives On, as well as a children's book about the disaster, Inside the Titanic. 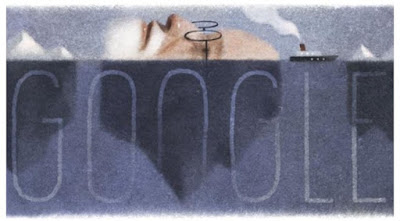 "The mind is like an iceberg, it floats with one-seventh of its bulk above water." ~ Sigmund Freud, 6 May 1856 – 23 September 1939, Austrian neurologist, father of psychoanalysis.

Google celebrates, Signund Freud's 160th with an interesting doodle of the "iceberg theory"."


Do you believe love is a "transient psychosis?" Freud did. 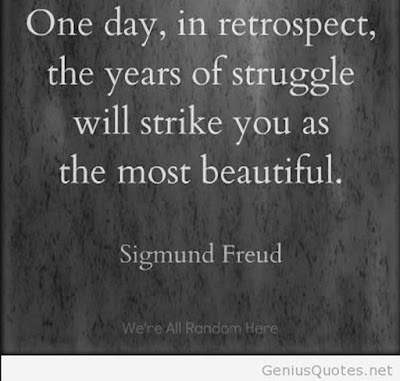 According to a post titled "By the Numbers: 125+ Amazing LinkedIn Stats," as of February 4, 2016, there are over 441 million global LI users. In March 2015, an article by About LinkedIn reported LinkedIn as having over 111 million unique U.S. members.

Not surprising that in the 4th Quarter of 2014 more than 75% of new members came to LinkedIn from outside the United States -- currently 347 million registrants globally from over 200 countries and territories. Additionally LinkedIn revenue reported total revenue for Q4 at $643 million (an average increase of 44% year-to-year).

LinkedIn Enhancements and Acquisitions Over the Years

April 2013, a new streamlined tool was featured to enable LinkedIn users to tag each other in posts and comments

• LinkedIn Joins the HoaxBuster Club, Buys Patent for Fact-Checking System, FACTUALLY, A Gizmodo Blog, http://www.techradar.com/us/news/internet/stop-lying-on-linkedin-because-soon-you-won-t-be-able-to-1291702
•http://www.forbes.com/sites/learnvest/2013/03/04/8-mistakes-you-should-never-make-on-linkedin/
•8 Mistakes You Should Never Make on LinkedIn, Forbes http://www.forbes.com/sites/learnvest/2013/03/04/8-mistakes-you-should-never-make-on-linkedin/2/
Posted by Gloria Buono-Daly at 12:00 AM No comments: