William Shakespeare's B-Day: Today (4/23),
yesterday or tomorrow:That is the question.

“To be, or not to be: that is the question:
Whether 'tis nobler in the mind to suffer
The slings and arrows of outrageous fortune,
Or to take arms against a sea of troubles,
And by opposing end them?
To die: to sleep ..." ~~ William Shakespeare
(26 April 1564 - April 1616), English poet and playwright; Greatest writer in the English language, pre-eminent dramatist. Also referred to as England's national poet and the "Bard of Avon," quote taken from "Hamlet" 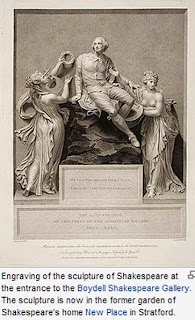 HAPPY 450th B-DAY to William Shakespeare, world’s most quoted, most translated, most performed, yet most mysterious author.

Will Google be celebrating with a doodle? For sure will update this post if so. No Google doodle for Shakespeare this year? Shakespeare’s works -- including his collaborations, comprise of 38 plays, 154 sonnets, two long narrative poems, two epitaphs on a man named John Combe, one epitaph on Elias James, and several other poems -- used over 21,000 different words which are credited by the Oxford English Dictionary as introducing over 3,000 new words.

His plays have been translated into every major living language and are performed more often than those of any other playwright.

WORLD REKNOWN, YET MYSTERIOUS
Interestingly, there is much skepticism and gaps in William Shakespeare that still remain a mystery to this day. Besides church baptism and court records, there is no proof -- no records, not even one original handwritten manuscript that exists nor any other evidence that William Shakespeare could even write a complete sentence.

There is also controversy as to how a small-town boy with no college education, who moves to London to work as an actor and begins to write masterpieces of such beauty and sophistication. Among the many doubters are novelists and essayists Henry James, Mark Twain, Walt Whitman, Sigmund Freud, Orson Welles and Sir John Gielgud. 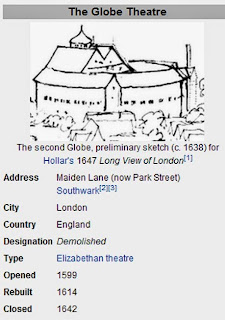 Shakespeare built the largest open amphitheater in London called “The Globe Theatre.” The Globe was owned by actors who were also shareholders in Lord Chamberlain's Men.

Two of the six Globe shareholders, Richard Burbage and his brother Cuthbert Burbage, owned 25% shares each; the other four men, Shakespeare, John Heminges, Augustine Phillips, and Thomas Pope, owned a single share, or 12.5%. 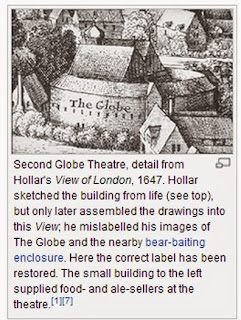 Originally William Kempe was intended to be the seventh partner, but he sold out his share to the four minority sharers, leaving them with more than the originally planned 10%).

These initial proportions changed over time as new sharers were added. Over the course of his career, Shakespeare's share diminished from 1/8 to 1/14, or roughly 7%. 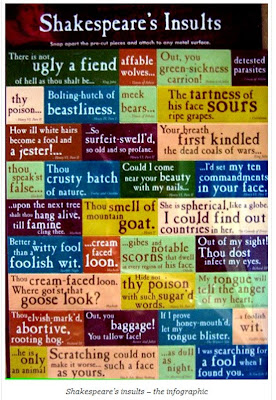 SHAKESPEARE BARBS IN EVERYDAY COMMON LANGUAGE
The way Shakespeare used phrases and words are so common in everyday life today they are heard on radio, TV, and digitally. Here are few of the many everyday words:
“Wild goose chase,” “vanish into thin air,” “good riddance,” “naked truth,” “a sorry sight,” “heart of gold,” “send him packing,” “a piece of work,” “slings and arrows of everyday life,” “to be or not to be, that is the question,” “O Romeo O Romeo, wherefore art thou Romeo," “I'll not budge an inch," "we have seen better days," "a dish fit for the gods," “it’s Greek to me.” 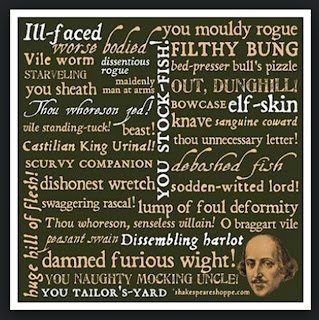 Also worth noting are Shakespeare’s popular phrases that were used by many politicians including political speeches: “fair play,” “foregone conclusion,” “one fell swoop,” etc.

Authors also borrowed Shakespeare phrases for book titles, e.g., Aldous Huxley's “Brave New World,” and interestingly Shakespeare’s “what the dickens” was around centuries before the birth of Charles Dickens in 1812; Amazon's ebook, “Kindle” was from Shakespeare’s 'Two Gentlemen Of Verona," ACT II, SCENE_VII “As soon go kindle fire with snow, as seek to quench the fire of love with words.”

The phrases go on and on so much so that many cannot recall whether the words are from the bible or Shakespeare’s literature. Not surprising, Shakespeare’s writings remain the second most quoted with the first being the bible. 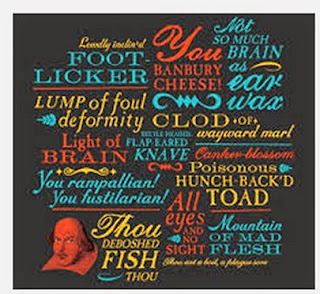 SHAKESPEARE EPIC INSULTS
There can never be enough of Shakespeare particularly when it comes to his epic “Bard” insults throughout his Elizabethan literature. Here is a few of his many:
"There's small choice in rotten apples" from Taming of the Shrew; "I desire that we be better strangers" from As You Like It; "Thou art a boil, a plague sore, an embossed carbuncle in my corrupted blood" from King Lear; "You have such a February face, so full of frost, of storm and cloudiness" from Much Ado About Nothing; "If you spend word for word with me, I shall make your wit bankrupt" from Two Gentlemen of Verona; "I'll beat thee, but I should infect my hands" from Timon of Athens. 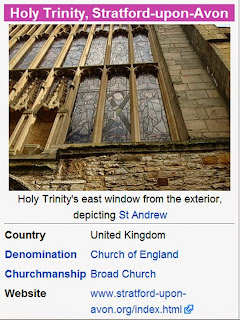 SHAKESPEARE’S BIRTH
Records indicate Shakespeare was baptized at Holy Trinity Church in Stratford-upon-Avon on April 26th 1654, and many historians agree he was probably born 3 days prior (April 26th).

He was the third child of John Shakespeare, a leather merchant, and Mary Arden, a local landed heiress. William had two older sisters, Joan and Judith, and three younger brothers, Gilbert, Richard and Edmund. 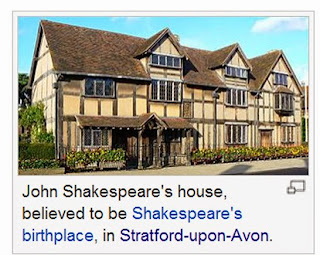 Before William's birth, his father became a successful merchant and held official positions as alderman and bailiff, an office resembling a mayor. However, records indicate John's fortunes declined sometime in the late 1570s.

William Shakespeare was brought up in Stratford-upon-Avon and at age 18 he married Anne Hathaway (26 and 3 months pregnant), with whom he had three children: Susanna (May 25, 1583, and twins a son Hamnet and daughter Judith (born February 2, 1585). 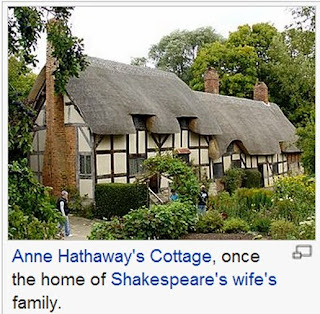 At that time in England about a third of all children died before the age of 10.

Shakespearean scholars speculate on the relationship between Hamnet and his father's later play Hamlet, as well as on connections between Hamnet's death and the writing of King John, Romeo and Juliet, Julius Caesar, and Twelfth Night.

It is believed that beginning 1590, he began a successful career in London as an actor, writer, and by 1592 became part owner of a playing company called the Lord Chamberlain's Men, which later became known as the King's Men after the crowning of King James I in 1603.

The King's Men company was very popular, and records show that Shakespeare had works published and sold as popular literature during that time.

The theater culture in 16th century England was not highly admired by people of high rank. However, many nobility were patrons of the performing arts and friends of the actors. Early in his career, Shakespeare was able to attract the attention of Henry Wriothesley, the Earl of Southampton, to whom he dedicated his first- and second-published poems: "Venus and Adonis" (1593) and "The Rape of Lucrece" (1594). 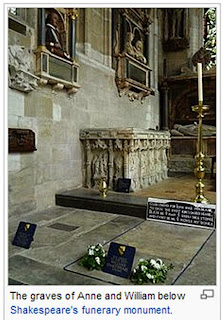 Despite all of the great works attributed to Shakespeare, there is still very little known about Shakespeare himself, no account of his appearance, i.e., tall or short, thin or chubby, face, etc.

Shakespeare retired to Stratford around 1613 at age 49, and died there three years later.

BARDOLATRY
Shakespeare’s reputation did not gain popularity until the 19th century.

The Romantics acclaimed Shakespeare's genius, and the Victorians worshipped Shakespeare with such reverence that Irish playwright and Nobel Prize and Oscar winner, George Bernard Shaw, coined "bardolatry," the excessive worship of William Shakespeare.

In the 20th century, Shakespeare’s work was repeatedly adopted and rediscovered by new movements in scholarship and performance. His plays remain highly popular today and are constantly studied, performed, and reinterpreted in diverse cultural and political contexts throughout the world. 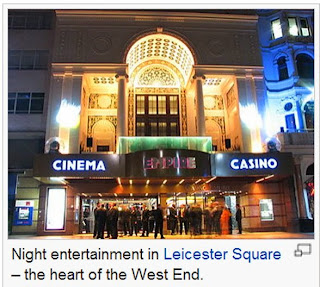 SHAKESPEARE IN LOVE
A stage adaptation of the multi-Oscar award winning film, “Shakespeare In Love,” is currently in production, due to have its world premiere in London's West End in July 2014.

The film depicts a love affair involving Viola de Lesseps (Gwyneth Paltrow) and playwright William Shakespeare (Joseph Fiennes) while he was writing the play Romeo and Juliet. The story is fiction, though several of the characters are based on real people. In addition, many of the characters, lines, and plot devices are references to Shakespeare's plays.

All photos courtesy of Wikimedia; If any screen shots were taken from video and websites credit will be mentioned. All other photos will be credited as required.
Posted by Gloria Buono-Daly at 9:00 PM