The 41st NYWICI Matrix Awards: Big Effen Deal? You Bet It Was! 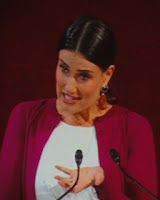 “Last thing, for Rosie, if you are ever in your life getting some award and you think: Why me? Just keep moving and say, ‘Why the eff not?’” -- Idina Menzel , star of "Wicked," and Matrix Award Honoree. Menzel was the final honoree, and her closing remarks were an encore and testament to Rosie O'Donnell that despite all of the controversy she has endured, Rosie is truly an inspiration! 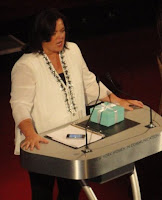 So many highlights at NYWICI's Matrix Awards. I just had to get my most memorable moment out right away. I must say the most impressive and inspiring moment at Matrix Awards for me was when I had the opportunity to ask Matrix Awards Honoree Cindi Berger my question of the day. Of course, I also asked permission to ask Rosie O'Donnell, and Cindi graciously approved. This year's Matrix Question of the Day had to do with success and was directed to everyone, attendees, honorees, and presenters:
"OK everyone knows that you've made it, you're a success, when did you know you made it?"
"I knew I made it when Lois Smith took me on."
-- Rosie O'Donnell 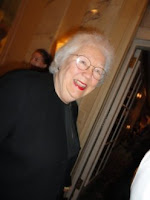 Besides all this, I was so inspired and in awe to meet PR legend and retired celebrity publicist Lois Smith (right photo). Besides work with Rosie O’Donnell, Smith’s career includes many other A-listers from the likes of Robert Redford, Meryl Streep, Whitney Houston, Martin Scorsese, Michelle Pfeiffer, Sean Penn, Dick Cavett, Liza Minelli to other iconic entertainment luminaries including Marilyn Monroe, Grace Kelly and Prince Rainier. When asked the Matrix question of the day, Smith replied with a happy sigh: 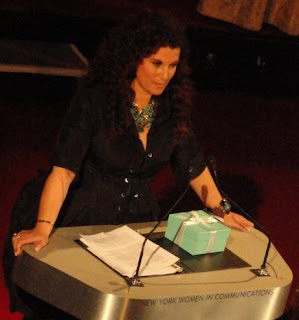 I was honored and impressed to meet, Matrix Honoree, Cindi Berger, publicist and managing director at PMK/HBH,(left photo). Besides work with Rosie O’Donnell, over the past two and a half decades, Berger has handled PR for a long list of A-listers including Star Jones, the Dixie Chicks, 50 Cent, Harry Connick Jr., Billy Crystal, Jessica Simpson, Bette Midler, Sharon Stone, Barbara Walters, Tyra Banks, and Mariah Carey. Berger is known for turning celebrity damage control into an art with her signature "no comment" comment. When asked Matrix question of the day, Berger replied in her true gracious, style:


"Sort of a combination of everything. It's not just one moment. It's moments like this where you go well I guess I've made it!"
-- Cindi Berger 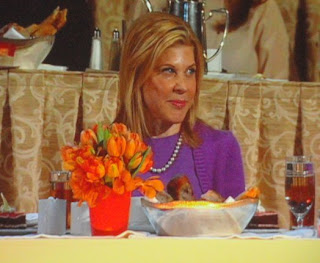 Marketing Strategist, new products expert, and Matrix Honoree, Robin Koval, President, Kaplan Thaler Group (right photo), who has been a driving force in the advertising world for over 20 years replied with delightful insight:

"The most important thing when you know you made it is that you never know you made it. You just keep doing it every day and then one day you wake up and you're saying who is that girl in the corner office?" -- Robin Koval 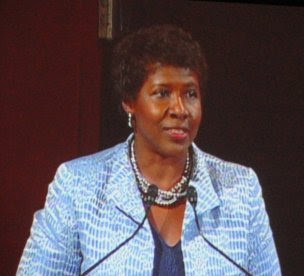 American journalist, television newscaster, author and Matrix Honoree Gwendolyn L. "Gwen" Ifill (left photo), is truly an inspiration. As managing editor and moderator of Washington Week and a senior correspondent for the PBS NewsHour, Ifill has moderated the 2004 and 2008 Vice Presidential debates it became clear to me why she is known for her "razor-sharp historical perspective and political analysis. Ifill is also the author of the book The Breakthrough: Politics and Race in the Age of Obama. 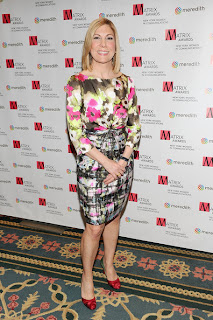 Also answering "Question of the Day," Matrix Emcee, Lesley Jane Seymour (right photo), editor in chief of More Magzine. I was fortunate to get the chance to ask her the my Matrix Q of the Day. Seymour is known for repositioning magazines and highly regarded for developing editorial programs that result in National Magazine Award nominations to spearheading signature cause-related programs, including Time to Talk Day, which raised awareness for domestic violence and the One World/One Wish campaign for the international relief organization Save the Children. She is also the author of two books: On the Edge: Images from 100 Years of Vogue (Random House), and I Wish My Parents Understood (Freundlich/Penguin). Here's what Seymour said when asked the Matrix Q of the Day:


"That's a good question. You know, I think you never really know that you've gotten there. I think you're always struggling. You're always struggling, You're always never thinking you're there. I mean, if you're like a normal person, you just are going from the next thing to the next thing. I mean for me, the most important thing is being out there and able to help other women. Because that's what communications does, I believe. And once when I was at Marie Claire where I started getting out there, traveling to Africa, and going places by myself and covering things for women elsewhere, for me that was the turning point. And I don't know if it would be a success but that's when I understood I was powerful and I could do something with who I am." -- Lesley Jane Seymour

Stay tuned for more on NYWICI Matrix Awards luncheon by visiting this blog regularly or subscribing to the RSS feed. Hope to see you all at Matrix 2012 same place, same time, on Monday, April 23, 2012!

Every year since 1970, NYWICI has awarded outstanding women in communications the prestigious Matrix Awards. The long list of past winners reads like a who-is-who of exceptional women in the fields of advertising, books, broadcasting, film, magazines, new media, newspapers and public relations and is a true reflection of achievements by women in communications. For more information visit NYWICI.org
Posted by Gloria Buono-Daly at 2:31 PM