"...So ...Great night tonight. We have 4 black nominees...Kinda like the deaf Oscar jam tonight ... You know why I love the Oscars. Cause the Oscars are the only awards show where the people nominated don't really perform...There's no acting at the Oscars ...The only acting you see at the Oscars are when people act like they're not mad when they lost...Like I remember one year when Halle Berry won the Oscar Nicole Kidman was smiling so wide she shoulda' won an Emmy at the Oscars for her great performance ...See at least they make white movies for people to enjoy ... real movies with plots ...with actors not rappers ... with real names like "Catch Me If You Can," "Saving Private Ryan," ... black people movies don't have real names ... you get names like "Barbershop," that's not a name that's just a location ... "Barbershop," "Cookout," "CarWash," ... they've been making the same movies for 40 years. That's right you know laundromat is coming soon. And after that check-cashing place." ~~ Chris Rock (Christopher Julius "Chris" Rock III) actor, comedian, voice artist, director, writer, and producer, excerpts from him while hosting the 2005 Oscar Awards (77th). 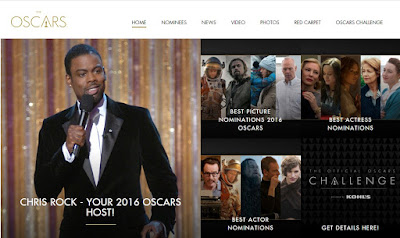 “It will be a night that ends with a lot of drunk, disappointed people.” ~~ Chris Rock, Actor, comedian, on hosting Oscar 2016 (Image left is screen shot of Oscar.com homepage)

Two films that have the most nominations are “Revenant” (12 nominations) and “Mad Max: Fury Road” (10 nominations). This year, entertainment’s most valued entertainer, Chris Rock, will host again. Rock hosted the 77th Oscar awards eleven years ago (2005). According to a recent CNN post, "Chris Rock is truly the MVP of the entertainment industry," Academy Awards producers David Hill and Reginald Hudlin said in a statement.

WHO DO YOU THINK THE WINNERS WILL BE? CAST YOUR VOTE ON OSCAR CHALLENGE.

The 88th Oscars will be broadcast live from Hollywood's Dolby Theatre on Sunday, Feb. 28 at 7 p.m. EST on ABC, and will be televised in more than 225 countries. Host Chris Rock, joked by referring to this year awards as "white BET Awards."

More Oscar nomination coverage is at the Official 88th Annual Academy Awards -- Oscar.com and visit the “Oscar Nominee” section of the Website. My picks are in the category headers below. Oscar.com is also interactive and has a "My Picks" section at http://oscar.go.com/mypicks. I've also included links to more information about the film and noted if any nominees have had previous Oscar nominations/wins in the listings below:

My previous scores have been 85% right on Oscar.com. Wonder what my score will be this time. Whatever my score this year, I'll share it on Facebook and this blog.

Please visit this blog frequently and share this with your social media. Thanks. Nominations are at Oscar.com page at http://oscar.go.com/news/nominations/oscar-nominations-2016-the-complete-list-of-nominees
Posted by Gloria Buono-Daly at 8:06 AM