“Keep away from people who try to belittle your ambitions. Small people always do that, but the really great make you feel that you, too, can become great!”
~~ Samuel Langhorne Clemens, pen name Mark Twain, American humorist and author of “The Adventures of Tom Sawyer” (1876) and sequel, “Adventures of Huckleberry Finn” (1885) (b. November 30, 1835– d. April 21, 1910) ; known as the “Father of Literature.”


Would you believe the author of “Adventures of Huckleberry Finn,” known as the “Greatest American Novel” of all time was born 178 years ago today? And would you believe that his advice on family and public etiquette as well as inspiring wit and wisdom from greatness, getting things done, and morals, to dress, health, food, and childrearing, etc., are forever relevant. Twain, perhaps the greatest, genius storyteller put himself in everything he did.

Image above courtesy of Wikimedia.org. 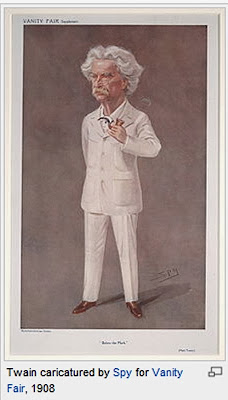 Intriguing that Twain would die of heart attack one day after the comet's closest approach to Earth on April 21, 1910, at his home in Redding, Connecticut.


Twain’s first great success as a writer, was in 1865 when he wrote a short story "The Celebrated Jumping Frog of Calaveras County" which brought him national attention. 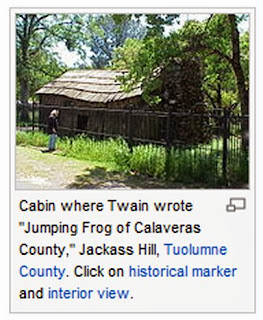 There is speculation about his pen name. Before deciding on his pen name "'Mark Twain" he used different ones – “Josh" until 1863 and pen name "Thomas Jefferson Snodgrass" for a series of humorous letters. Twain stated that his famous pen name of Mark Twain was not only his idea but also from a captain who used the name “MARK TWAIN” the call made regarding safer condition of the Mississippi River– two fathoms (12 feet or 3.7 metres), as written in his book “Life on the Mississippi.”

However biographer George Williams III claims that he used “mark twain” in reference to a running bar tab that he frequently incurred while drinking at John Piper's saloon in Virginia City, Nevada.

Friend and future Twain biographer Albert Bigelow Paine reported shortly after Twain’s death at his home in Redding, Connecticut that although doctors listed his death as “angina pectoris,” he died of a broken heart.

His surviving daughter, contralto concert singer, Clara (2nd born of Twain’s 3 daughters), was by his side during his death.