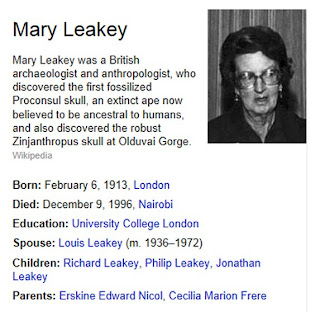 “I dug things up. I was curious. I liked to draw what I found” … “I had never passed a single school exam, and clearly never would.”
~~ Mary Leakey
(February 6, 1913 – December 9, 1996) British archaeologist and anthropologist, and world renown distinguished fossil hunter. Leakey discovered the first fossilized Proconsul skull, an extinct ape now believed to be ancestral to humans.

Today, would have been Leakey’s 100th birthday, and Google paid homage to her life and works with a lovely doodle, an exploratory-inspired theme representing one of her many achievements – the discovery of 3.5 million-year-old fossilised hominid footprints. She is also known as a “giant in the study of human origins.”

Happy 100th B-Day Mary Leakey! Leakey also discovered the robust Zinjanthropus skull at Olduvai Gorge. For much of her career she worked together with her husband, Louis Leakey, in Olduvai Gorge, uncovering the tools and fossils of ancient hominines. 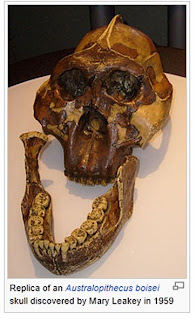 She developed a system for classifying the stone tools found at Olduvai. She also discovered the Laetoli footprints.


In 1960 she became director of excavation at Olduvai and subsequently took it over, building her own staff. After the death of her husband, she became a leading palaeoanthropologist, helping to establish the Leakey tradition by training her son, Richard, in the field. 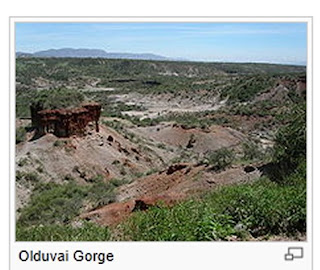 Leakey, a renowned paleoanthropologist, had not only conducted significant research of her own, but had been invaluable to the research careers of her husband Louis Leakey and their sons Richard, Philip and Jonathan. 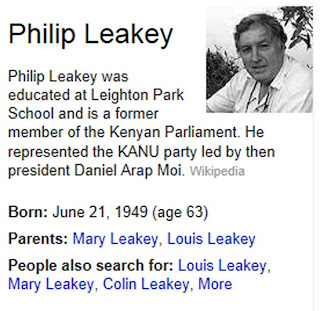 “Mother gave us every freedom to learn by experience as early as I can remember …This gave me tremendous self-confidence and taught me responsibility at an early age. As I grew I was able to take on more responsibility and in a way it always put us as children ahead of the pack. It encouraged and enhanced leadership skills.” ~~Philip Leakey , youngest of 3 sons to Mary and Louis Leakey (source: *Christian Science Monitor, see below)


Please visit this blog frequently and share this with your social media and professional network. Thanks.
Posted by Gloria Buono-Daly at 9:02 AM