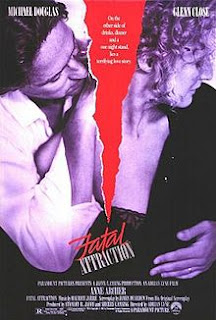 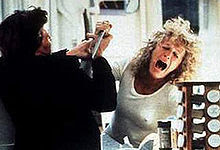 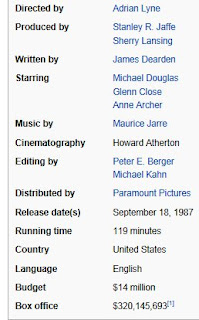 The film was directed by Adrian Lyne, and was about a married man (Douglas) who had a weekend affair with an single career woman (Close) who becomes miserably obsessed and jealous that her affair was just a fling and that he was a happily married man. Desperate and mortified, she resorts to stalking, blackmailing and even boiling his daughter’s pet bunny.

Critics were so enthusiastic about the film it became a cult. The film received six Academy Award nominations, including that for Best Picture, Best Actress for Close and Best Supporting Actress for Archer.

The provocative film created much controversy and discussion about the risks of infidelity. Feminists had major gender issues, particularly because of the films association of a successful, single, career woman, Alex (played by Close) as being profoundly psychotic yet depicting the careless married man who lacked compassion and responsibility, Dan (played by Douglas), as a loving father, husband who was just a normal guy.

The film also had an effect on men. In a 2008 Glenn Close interview, she mentioned that men still come up to her and say “You scared the shit out of me; Sometimes they say, you saved my marriage,” said Close.

Fatal Attraction grossed US$156.6 million and was the second highest-grossing film of 1987 behind Three Men and a Baby.

Interestingly, the original ending of the film was so impressive and depressing that it received poor feedback during pre-release viewing that the final scene was completely reshot in 3 weeks.