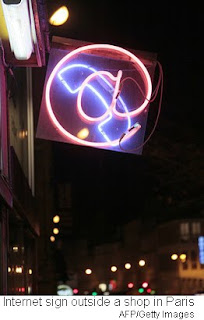 Guess Who Has Been Nominated for the 2010 Nobel Peace Prize?
According to an article today by "The Wall Street Journal" the "Internet!" Originally nominated by the Italian version of Wired magazine and already eleven backers with two including the 2003 Nobel Peace Prize recipient, Shirin Ebadi and Nicholas Negroponte, founder of One Laptop Per Child, the internet as contender appears to have growing momentum worthy of consideration.

Who would accept the prize if the Internet happened to be the winner? questions CNN SciTechBlog. Suggestions include LOLcats and Al Gore.
Besides bridging gaps and serving the world as a communications catalyst for many events particularly major disasters, many supporters, including Internet For Peace, believe the internet is more like a "web of people" than just a tool.

Do you think the Net can be nominated? Answer this poll at: http://bit.ly/Poll-NobelPeacePrize2010


Below video: "Internet for Peace Manifesto" video.
Posted by Gloria Buono-Daly at 7:02 PM