To See or Not to See ... Punxsutawney Phil makes his 134th prediction on February 2, 2020 and we can all look forward to an early spring

This is a repost of earlier annual Groundhod Day posts.

To See or Not to See ... Punxsutawney Phil makes his 134th prediction on February 2, 2020 and we can all look forward to an early spring.  Staten Island Chuck G. Hogg also didn't see his shadow. In the meantime, check out this #Jeep ad with Bill Murray on SUPERBOWL LIV which falls right on Groundhog day 2020. 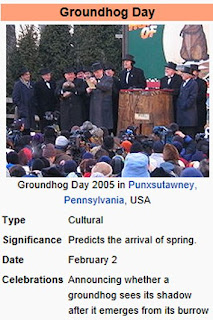 "This is pitiful. A thousand people, freezing their butts off, waiting to worship a rat! What a hype. Well they used to mean something in this town, they used to pull the hog out and they used to eat it. You're hypocrites! All of ya! You got a problem with what I'm saying, Larry? Untie your tongue and you come out here and talk, huh? Am I upsetting you, Princess? You know you want a prediction about the weather, you're asking the wrong Phil. I'll give you a prediction. It's gonna be cold, it's gonna be gray, and it's gonna last you the rest of your life." ~~ Bill Murray , American actor and comedian, as quoted in the 1993 critically acclaimed film "Groundhog Day"

At 7:20 am today at Gobbler's Knob, Punxsutawney Phil is made his 134th prediction.  This year, he doesn't he see his shadow?  We also have New York City's, Staten Island's Chuck who will also make his prediction. 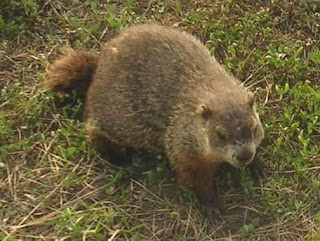 Punxsy Phil will predict what the next 6 weeks of weather will be on February 2nd. Celebrations begin on February 1st through the 3rd.

Amazingly, for over two centuries, (1886 or earlier) crowds as large as 40,000 have gathered at Gobbler's Knob hill at Punxsutawney, Pennsylvania to celebrate. Other celebrations taking place in Pennsylvania include Quarryville in Lancaster County, the Anthracite Region of Schuylkill County, and Bucks County.

The largest Groundhog Day celebration is held in Punxsutawney, Pennsylvania. Groundhog Day received more mass attention after the release of the 1993 comedy film “Groundhog Day,” starring Bill Murray who plays Phil Connors, an egotistical Pittsburgh TV weatherman who, during a hated assignment covering the annual Groundhog Day event in Punxsutawney, dreams living February 2nd over and over while repeatedly indulging in hedonism and numerous suicide attempts.

Finally he wakes up and realizes his life matters and prioritizes and makes drastic changes and improvements. In 2006, the film was added to the United States National Film Registry as being deemed "culturally, historically, or aesthetically significant."

Many wonder just how scientific is Punxsy Phil's shadow. According to groundhogday.org, the furry fortune teller is accurate 75% to 90% of the time, while a Canadian study of 13 states has the success rate at 37% and the National Climatic Data Center (NCDC) has the overall prediction rate at 39% accurate (since 1987).

The Stormfax Weather Almanac reports Punxsutawney Phil has seen his shadow 100 times (as of last year 2014) which equates to 101 times this year (2015), no shadow 16 times with no record 9 times. Groundhog day in Staten Island is sponsored by Time Warner Cable and garnered with trumpets to wake up the little Staten Island's very own woodchuck, "Chuck," as the Staten Island Zoo opens its gates at 6:30 a.m. on Feb. 2.

What do you think? Do you believe in the science or spirit of Groundhog Day?


Please visit this blog frequently and share this with your social media. Thanks.
Posted by Gloria Buono-Daly at 8:24 AM