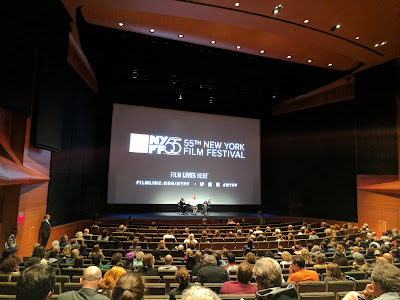 After seeing over a dozen movies at TIFF last month, I attended four more at the New York Film Festival (NYFF) in its 55th year run by the Film Society at Lincoln Center.  Although it is a few days longer than TIFF, NYFF is much less hectic because all films are held on the Lincoln Center campus and seats are reserved at the main venue, Alice Tully Hall.

I also tend to see films that I missed at TIFF here, since there is always some overlap. This year is no exception as I saw two films I was not able to schedule at TIFF.  Those were the documentary Boom for Real: The Late Teenage Years of Jean-Michel Basquiat and Greta Gerwig’s acclaimed directorial debut, Lady Bird.  The two others were Todd Hayne’s Wonderstruck and Woody Allen’s Wonder Wheel. (Counting Professor Marston and the Wonder Women, which I saw at TIFF, that makes three festival movies with “wonder” in the title!)

Here are my thoughts as well as award season possibilities. 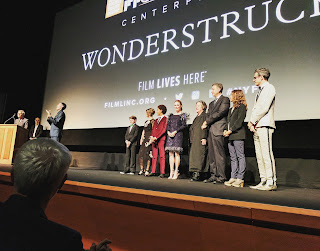 Wonderstruck (Release Date October 20):  Having already played at Cannes, Venice and Telluride, Wonderstruck came to NYFF with some mixed reviews.  Director Todd Haynes (Carol, Far from Heaven, Velvet Goldmine) adapts Brian Selznick’s 2011 novel about two 12-year-old deaf kids (Rose was born deaf and Ben loses his hearing when he’s struck by lightning), born 50 years apart and their adventures in Manhattan, winding up at the Museum of Natural History, which plays a pivotal role in both stories.

Having not read the novel, I still saw the connection between Rose and Ben coming from a mile away but the pleasure gotten from the film are the parallel narratives, one told as a 1920s silent film and the other a gritty tale of the 1970s. Julianne Moore is arguably the star here, and she shines in two supporting roles in both narratives but the kids take front and center.  Deaf actress Millicent Simmons plays young Rose with an adorable haircut, expressive face and her emotions always authentic.  Oakes Fegley as Ben (who speaks throughout since he just lost his hearing) is also sympathetic in his quest to find where he belongs.  He has a nice chemistry with Jaden Michael, who plays his new hearing friend, Jamie. (Michelle Williams is also briefly in the film in flashbacks as Ben’s late mother)

Overall, I enjoyed Wonderstruck and Haynes brings the story to the screen with a lot sensitivity and creative vision.  It’s a very sweet and sentimental story of two children who don’t let their deafness stop them from seeking adventure or a place to belong.  Haynes seems to want the film to be seen by a deaf audience, with close captions used throughout.  He even used a sign language interpreter during the on-stage introduction to the film! (4/5) 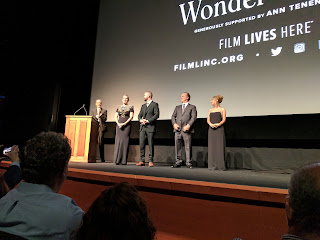 Wonder Wheel (Release date December 1st):  Written and directed by Woody Allen, Wonder Wheel features a tour-de-force performance by Kate Winslet, who plays a neurotic 40ish waitress in 1950s Coney Island.  (Viewers might recall Cate Blanchett in Blue Jasmine, with her character wistful for the past as she descends into a state of semi-madness – harkening back to Blanche Dubois).

Justin Timberlake channels a younger, handsomer Woody as a 30ish playwrighting student who works as a lifeguard and serves as our slightly unreliable narrator.  He has an affair with the unhappily married Ginny while desiring her twenty-something stepdaughter, Carolina (a luminous Juno Temple) who is on the run from her abusive mobster ex-husband and the mob. Rounding out the cast are a very good Jim Belushi as Ginny’s blustery husband and Jack Gore as her pyromaniac-in- training son from a previous marriage.

Although there are some humorous moments in the script, it is not a typical Woody Allen comedy and plays out as a tragedy.  Timberlake’s character loves Eugene O’Neill and characters with tragic flaws and the film is written and directed almost like an O’Neill play.

As for Oscar chances, I think Winslet may snag a nod for Best Actress as she captures Ginny’s neuroses, passion and roughness into a vividly memorable role.  Allen may get direction and screenplay as well. (4/5) 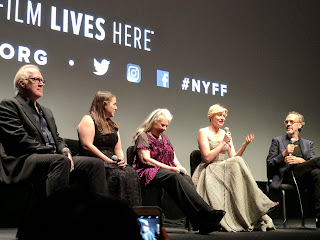 Lady Bird (Release Date November 3rd): Greta Gerwig’s hilarious and touching directorial debut is not about the former First Lady, but a coming of age story of a Sacramento teen at a Catholic high school. Saiorse Ronan plays Christine aka “Lady Bird” who is navigating her senior year of high school in the early aughts.  Ronan perfectly channels a younger Gerwig in the role and Laurie Metcalf is excellent as her prickly mother.

The supporting cast is excellent with Tracy Letts as her loving, recently laid off dad, Lois Smith as one of the school’s nuns, Beanie Feldstein as her BFF, and Timothee Chalamet and Lucas Hedges as her love interests.  The central tension is Lady Bird’s wish to go to college in NYC and the financial strain this desire puts on her parents.

I thoroughly enjoyed Lady Bird and I hope it gets showered with nominations.  It would be nice to see Gerwig get a directing and screenplay nod along with Ronan and Metcalf for their acting. (4.5/5) 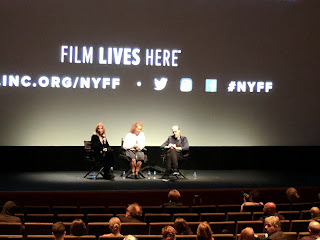 Boom For Real, the Late Teenage Years of Jean-Michel Basquiat (Release date TBD):  Brooklyn born artist Jean-Michel Basquiat has been the subject of multiple films and documentaries since his death from a heroin overdose in 1988 at the young age of 27.  Sara Driver’s Boom For Real covers his formative years of 1979-1981 as a teenage artist making his mark on the Lower East Side of Manhattan.  Many of his peers and friends were interviewed such as Fab Five Freddy, Jim Jarmusch, Alexis Adler, Patricia Field and many more.

Basquiat hovers over the film in a ghost like manner, which was intentional, according to Driver in the post screening Q&A.  We barely hear him speak (mostly b/c he rarely did any video interviews) but instead see films of him creating graffiti or photographs of him creating art or poetry.  Driver also spends time setting the stage of what life was like for young artists in the late 70s/early 80s NYC, which was going through an economic transformation.  NYC is just as much as a star in this documentary as Basquiat, both relentlessly creating art and eventually commerce. (4/5)


Posted by Andrea Goldstein at 3:23 PM