Another Toronto International Film Festival (TIFF) is in the record books, having spent 7 days watching a total of 14 movies (and one In Conversation with Gael Garcia Bernal).  I did miss one film (the sole documentary I was able to schedule – Grace Jones: Bloodlight and Bami) due to a flight delay.

Below, in the order I viewed them, are my quick thoughts, Oscar season potential and rating of each film on a scale of 1 to 5 (5 being the best).  You’ll notice that I saw many films about women and several directed by them, which showed TIFF’s commitment to featuring women’s vision and voices at the festival. 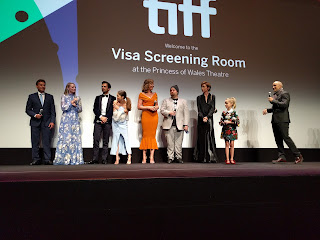 I, Tonya – This Craig Gillespie directed biopic/satire about Tonya Harding exceeded my expectations.  Margot Robbie was very convincing (and somewhat sympathetic) as the damaged Olympian who deals with a complex relationship with her tough love mother (a scene stealing Allison Janney), her abusive first love and husband, Jeff Gillooly (Sebastian Stan) and her passion for figure skating.  It’s also hysterically funny in some scenes as well as very sad.  Robbie did some of her own skating, but clearly they digitally placed her head onto Tonya’s body or a skating double for harder moves like jumps and spins.  In terms of Oscar buzz, Robbie and Janney may get nominations for their strong performances. (4/5) 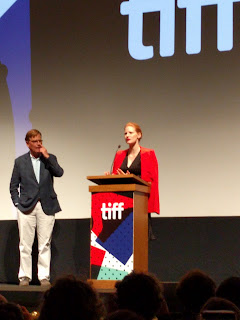 Molly’s Game – This film is immensely entertaining, and a win for Aaron Sorkin as a director and Jessica Chastain in the title role.  Chastain plays Molly Bloom who ran an underground poker game in NY and LA and winds up in trouble with the FBI.  She does very well with Sorkin’s fast paced dialogue and makes the audience root for Molly.  Idris Elba is also very good as her lawyer as well as Kevin Costner in a smaller role as her psychologist dad.  My only critique is that it could be edited a bit.  Chastain may get nominated for lead actress and Sorkin for the script. (4/5) 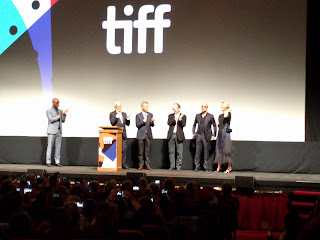 The Children Act – Another strong female lead in this British import, starring Emma Thompson as a no nonsense family court judge whose life is turned upside down when she gets involved in a case regarding a 17 year old Jehovah’s witness (Fionn Whitehead) who refuses a live saving blood transfusion.  Thompson is riveting in the role as well as Whitehead whose life she saves and the impact that has on both of them.  The weaker part of the film involves a subplot about her husband (Stanley Tucci) wanting to have an affair but it doesn’t distract from the overall level of the production.  Thompson may nab a nomination, but the field is crowded already. (3.5/5) 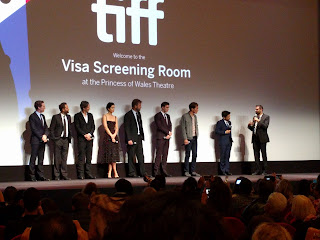 The Current War – This was a disappointment, despite a strong cast including Benedict Cumberbatch as Thomas Edison, Michael Shannon as George Westinghouse, Nicholas Hoult as Nikola Tesla and Katherine Waterston as Mrs. Westinghouse.  Pardon the pun, but a film about the race to bring electricity to the masses should be more electric.  I wasn’t that invested in Edison and cared more about Westinghouse.  The film is visually stunning but the characters weren’t as compelling nor was the story.  The audience response was pretty tepid and producer Harvey Weinstein didn’t look too happy at the premiere. Oscar chances are pretty slim, IMO. (3/5) 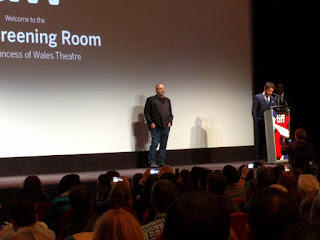 Update 10/10/17: With all of the news about Harvey Weinstein coming out now about his decades long sexual harassment,  I have to wonder if he knew a month ago that all of this would be coming out, since he looked terrible at the premiere.  He has since taken his name off the film as a producer.  Since more and more victims and Hollywood in general is coming out against his behavior, I have to wonder if his career is toast.  It's very clear that this kind of behavior is unacceptable and things need to change. 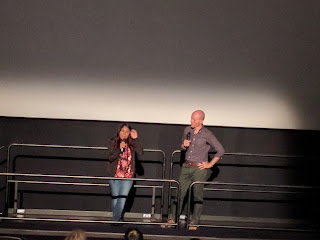 Mary Shelley – Director Haifa Al-Mansour (who comes from Saudi Arabia) lends her sensitive vision to the author’s love story with her eventual husband, the poet Percy Bysshe Shelley (the impossibly pretty Douglas Booth). She is most effective in documenting the inspiration for Frankenstein, which was published anonymously at 18. Elle Fanning does a convincing job as Mary and for the most part the movie succeeds as a period piece.  However, I didn’t care for Tom Sturridge’s performance as a cruel Lord Byron which made him look more like a 1970s rock star (complete with eyeliner, fluid sexuality and an ego to match) than an early 19th century poet.  Still, the story of finding her voice in her writing is inspiring for a lot of young women, who I hope see the film.  I don’t see this getting much Oscar buzz but you never know.  (3.5/5) 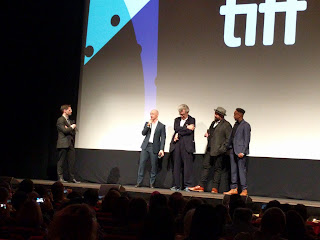 Submergence – I really didn’t know what to make of Wim Wender’s love story between an oceanographer (Alicia Vikander) and a water engineer/British spy (James McAcoy).  Told mostly in flashbacks, it’s beautifully shot in Normandy, France and they are both compelling to watch as two intellectuals fall in love.  Then they get separated since he’s going on a mission in North Africa and she’s going on a deep dive to prove that life thrives miles down in the ocean.  He’s captured and tortured by terrorists (while thinking of her) and she spends a lot of time checking her phone, wondering why he’s ghosted her.   Not sure of any Oscar contention here. (3/5) 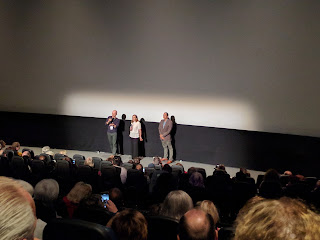 Woman Walks Ahead – The second Jessica Chastain film I saw here was the weaker of the two. Beautifully shot by director Susanna White and another good performance by Chastain as a Catherine Weldon, a merry widow who travels from NY to Standing Rock in the late 1880s to paint Sitting Bull’s portrait.  She and Sitting Bull (native Canadian actor Michael Greyeyes) develop a strong bond while the townspeople and the US Army (led by Sam Rockwell) try to discourage her from helping the Lakota people, with whom they want to sign a treaty to give up most of their land.  While sensitively acted and shot, the story is a bit too romanticized and takes too many liberties with the real story.  (3.5/5) 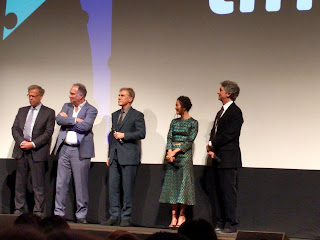 Downsizing – From what I’ve read, Alexander Payne’s fable about a man who literally shrinks his life was a polarizing entry at the festival.  I was on the side that really enjoyed it, mostly because it was so funny and I enjoyed the performances by Matt Damon, Christoph Waltz and breakout star Hong Chau.  Where the film may not gel is that it has a hard time deciding what it is – a character study, unexpected love story, sci-fi climate change morality tale or a satire on consumerism.  It might do well on the screenplay and directing categories for the Oscars.  I’m hoping Chau gets a supporting actress nod as a political dissident turned cleaning lady who changes the main character’s life, she’s that good. (4/5) 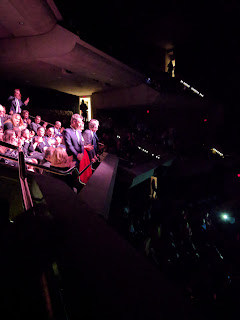 Darkest Hour – Joe Wright’s WWII era biopic of Winston Churchill was what I would call a prestige entry with Gary Oldman’s expert portrayal of Churchill as he becomes Britain’s Prime Minister and navigates fraught political waters.  The main dramatic arc revolves around whether Britain negotiates peace with Germany and Italy over a period of a few weeks, leading up to the evacuation of troops at Dunkirk (the subject of Christopher Nolan’s recent film).  What could’ve been a dry history lesson is instead riveting mostly due to the performances, writing and the fast pace.  I also enjoyed Downton Abbey’s Lily James as Churchill’s secretary who becomes the audience’s surrogate.   Kristin Scott Thomas is wonderful as Mrs. Churchill and I would’ve liked to see more of her.  Ben Mendelsohn brings some humanity to King George VI, but the film belongs to Oldman, who I hope wins the best actor Oscar. (4.5/5) 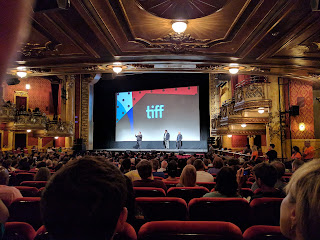 The Shape of Water – Although this didn’t win the Grolsch People’s Choice award (which went to Three Billboards Outside Ebbing, Missouri, with Frances McDormand), this was a festival favorite among audiences and critics.  Guillermo del Toro directs Sally Hawkins in a sure to be Oscar nominated role, a mute woman who is a janitor at a government lab in 1960s Baltimore (shot in Toronto).  She falls in love with a merman creature who is being held there and helps him escape, along with the help of her gay best friend (Richard Jenkins) and sassy co-worker played by Octavia Spencer.  Michael Shannon is the villainous boss and Michael Stuhlbarg plays a Russian scientist who also wants to save the creature.  The plot sounds a bit silly but the film works mixing many genres, ranging from horror to 1930s musicals, while celebrating otherness.  There is some typecasting, especially with Shannon and Spencer, but the film really belongs to Hawkins who communicates every emotion she feels without words. (4/5) 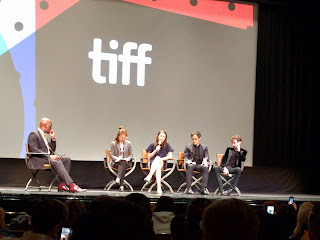 If You Saw His Heart – This film was probably one of my least favorites, which is a shame because Gael Garcia Bernal is a great actor and favorite of mine, but this is not a great addition to his resume.  I’m not sure if it was the direction (by first time French director Joan Chemla) or the lackluster story of a gypsy who loses his best friend in an accident and then lives in a run- down hotel while committing petty crimes to pay rent and trying to avoid his best friend’s brother, who blames him for the death.  He meets a beautiful woman who may be mentally unstable and falls for her.  It was nicely shot and Chemla creates a mood, but without a compelling story, this one goes nowhere and lacks, um, heart.  I did enjoy the interview with him the following evening, though and thankfully they focused on some of his other work. (2/5) 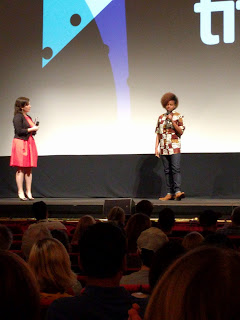 Mudbound:  Director Dee Rees (if you’re counting, this is the fifth film I saw at the festival directed by a woman) takes many narratives and has them gel beautifully in this film about two families, one white, one black who co-exist on a Mississippi farm in the 1940s.  The main narrative is about the friendship between two WWII soldiers (Garrett Hedlund and Jason Mitchell) from the families who bond, despite the difference in their races.  Unfortunately, their friendship has devastating consequences.  There are also fantastic performances from the ensemble including Carey Mulligan, a de-glamorized Mary J. Blige, and Jason Clarke.  Although it takes place 70+ years ago, the inclusion of white supremacists makes it especially relevant.  Despite some brutal scenes towards the end, the film ends on an uplifting note.  I hope the film gets some Oscar nominations – perhaps for picture, direction, screenplay and supporting actor nods. (4.5/5)

Eye on Juliet:  My final TIFF film was an indie from Canadian director Kim Ngyuen.  Gordon (Joe Cole), lives in Detroit and just was dumped by his girlfriend.  He works as a hexapod operator (a robot that is sort of like a drone but it doesn’t fly and has six legs) that guards an oil pipeline in North Africa.  During his surveillance sessions he keeps seeing a young woman named Ayusha. (Juliet3000 becomes her code name) Intrigued by her story (she is trying to escape an arranged marriage with an older man by leaving with her boyfriend), Gordon decides to buck protocol to help her.  The film is a bit fanciful, especially the ending, but overall was charming and showed how technology can bring people together who otherwise would’ve never crossed paths.  Not expecting Oscars for this one, but hope it finds an audience. (3.5/5)

Most of the films I saw had some merit and many of them will most likely be showered with accolades come Oscar season.  I am not done yet with festival season, as I am planning to see a few more during the New York Film Festival (NYFF) including Greta Gerwig's Lady Bird (which was well received at TIFF) next month.  I will be sure to post my thoughts!