Mark Strand, amazing poet...saw him just a few years ago at a reading, one of the most eloquent for sure may he RIP (b April 11, 1934 d November 29, 2014). Poet, essayist, translator, and Poet Laureate Consultant in Poetry to the Library of Congress in 1990; That night I was so was fortunate to purchase his book "Almost Invisible" and have him autograph it ... a delightful, insightful, treasure :) 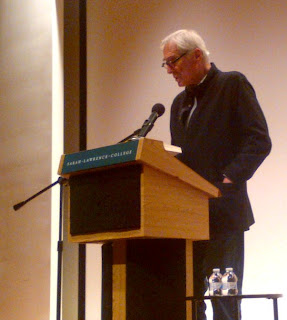 “There’s no confessions in my writing. I’m sure you know that already.”
~~ Mark Strand, October 10, 2012
Pulitzer Prize winner, Poet Laureate to the Library of Congress, American poet, essayist, and translator 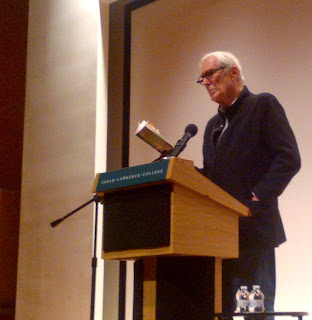 As Strand read his works, there was an awe of silence around the theatre and there is something very special about Strand’s amazing presence and natural eloquence -- from tilting his head to his hands grasping the podium and even the way he moved his feet -- he is so genuine, kind and gorgeous.

The session was followed by an informative and inspirational Q&A where Strand answered about 2 dozen audience questions. 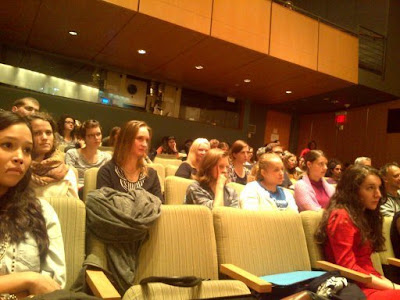 A wide range of questions were asked which lead to intriguing digressions ranging from the impact of the Surrealist movement and Fantastic art genre, and metaphoric and metonymic writing styles to sharing the one color he doesn't include on his palette and reading a quote from one of his favorite novels.

Below are worthy take-aways.

Q. How did you become a writer? What were the contributing factors?
A. I was never a reader. My parents were readers. One day we moved to South America and I was bored. My mother said “why don’t you write letters to your friends so they can write back to you.” I started doing that but I wanted it to be more than a letter.

Q. What attributes make you feel your poem is finished?
A. A poem that finally moves and I find it exhaustible. When you put it back on the psychic shelf and never go back to it.

Q. What’s your opinion of your individual art and how its worked into your other art?
A. My visual art cleanses my mind of verbal debris that seems to paralyze me at the end of the day. I could have claimed to be a visual artist or painter or collager. My friends who are do it all day long. My collages look like miniature abstract paints but I love doing it and it makes me happy and gives me a reason to wake up and get out of bed. One of my favorite novels is Dicken's David Copperfield. I urge you all to read David Copperfield. Strand then read an excerpt about Micawber, which is also included in the contents of his latest book Almost Invisible. "Gentlemen," returned Mr. Micawber, "do with me as you will? I am a straw upon the surface of the deep, and am tossed in all directions by the elephants--I beg your pardon; I should have said the elements." --Charles Dickens.
Strand then added "that sort of thing intrigues me."

Q. How wide is your palette?
A. My collages don’t look like collages. I have a pretty wide palette. The only color I don’t use is blue because it’s associated with the sea and sky. What’s more important than the palette is the thickness of paper.

Q. How do you deal with place and the notion that the poet doesn’t know where the poem is going. When you write poetry what is the process?
A. I’m a writer of poetry and never show anyone until the work is done. Problem with workshops is that you have all this input. The words from all the decision making become muddy. You have to go it alone and trust your own idiosyncratic thoughts. Poetry is more important than that. Poetry is more about experiencing. It has to sound like something you are glad with, but be sure it’s not something that was written by someone else.

Q. In the 1998 Wallace Shawn interview ("Mark Strand, The Art of Poetry No. 77". The Paris Review). You mentioned people don’t read poetry on the internet. Even with the internet, why do you still write longhand?
A. With longhand, you’re slowing down the process. The internet is too close to print. People who compose on the screen respond visually and not auditory. Young poets can’t detect ear and natural cadence with visual contact. Writing becomes more physical aggressive and passive when writing longhand.

Q. Why did you give up writing?
A. I gave up writing because I ran out of gas. When I say it and it sounds familiar like I’ve already done that before. When you experience that you decide to do something new. The urge to write is not a conscious decision. There’s something else besides consciousness in mind. Something else is being satisfied – an unconscious motivation. 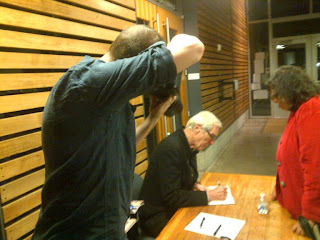 After the Q&A, Strand was available to autograph his books. 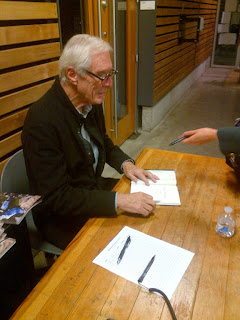 Born on Canada’s Prince Edward Island in 1934 and raised and educated in the United Sates and South America, Strand authored numerous books of poems including Man and Camel (Alfred A. Knopf, 2006), New Selected Poems (2007), Blizzard of One (Alfred A. Knopf, 2000), which also won the Pulitzer Prize; Dark Harbor (1993); The Continuous Life (1990); Selected Poems (1980); The Story of Our Lives (1973); and Reasons for Moving (1968). In addition to his poetry, Strand is also an editor, essayist, author of children’s books and translator. His honors include the Bolligen Prize, three grants from the National Endowment for the Arts, the Edgar Allen Poe Prize, and a Rockefeller Foundation Award, as well as fellowships from the Academy of American Poets, the MacArthur Foundation and the Ingram Merrill Foundation. He is currently professor of English and Comparative Literature at Columbia University (since 2005). 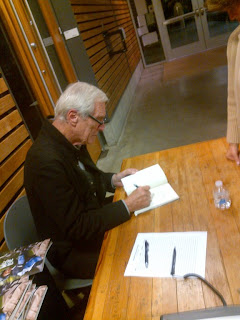 Strand’s academic career has taken him to numerous colleges and universities. Chronology below:

Posted by Gloria Buono-Daly at 8:30 AM