"My father could have been a great comedian but he didn't believe that was possible for him. So he made a conservative choice. Instead he got a 'safe job' as an accountant, and when I was 12 years old he was let go from that safe job. Our family had to do whatever we could to survive...I learned many great lessons from my father, not the least of which, was that you can fail at what you don’t want, so you might as well take a chance on doing what you love. "   ~~ Jim Carrey , Award winning actor, comedian, children's book author, philanthropist, on how his late father inspired him to follow his dreams. Quote taken from his speech at a recent Maharshi University Management Class of 2014 in Fairfield, Iowa, and received an honorary doctorate for his achievements as a comedian, artist, author, and philanthropist. (Photo,You Tube video screen capture; Full speech at http://youtu.be/ajMpfPYlHi4)

Last year, Google celebrated Father's Day with an interactive doodle that shows dads in many different roles with simple clicks. This year, Google's doodle celebrates Father's Day and World Cup with an adorable doodle moustached dad with the letter O.

While I'm at it, I have to share a photo of my Grandfather (Angelo Buono) circa about 1908 with a similar moustache like Google doodle. Born in Naples, Italy my grandmother would tell me stories of how he became an engineer and seeked a better life. Around 7 years later, 1915, he moved to New York, NY and opened a fruit and produce business on Arthur Avenue, the Bronx's Little Italy. The business stayed in the family for over 80 years (1915 - late 1990's).

WANT TO GIVE SOMETHING DIFFERENT THIS FATHER'S DAY? 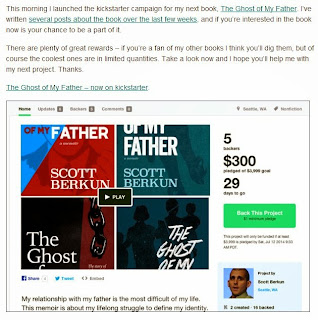 Help an author reach his Kickstarter quota for his next book about his relationship with his father.

Bestselling author Scott Berkun has a 6th book coming out and has launched a Kickstarter project for the book titled, The Ghost of My Father.

Berkun is taking a big risk with this project as it's a departure from his other books.

More information at his kickstarter project at https://www.kickstarter.com/projects/1844947983/the-ghost-of-my-father.

Berkun's blog posting "Why Fathers And Children Don't Get Along is also an interesting post which provides an interesting perspective about Berkun's relationship with his father." Here are additional Berkun posts about The Ghost of My Father.

Berkun is such a brilliant speaker and writer and I felt that his latest work will be a tribute to all children and dads in our world and in spirit. A donation as little as $1.00 helps another great Berkun book get published. Visit at https://www.kickstarter.com/projects/1844947983/the-ghost-of-my-father
(P.S. I learned about Scott Berkun from his previous business books and previous speaking engagements, including the Web 2.0 convention back in 2009, photos are on my Facebook the very last few are of Berkun speaking; Incidentally, as a social media evangelist I do not get monetary gain for any of my book reviews, pre-release mentions or announcements that I make on any of my blog posts or Examiner.com)

What things does (or did) your dad enjoy? Are you planning anything special this Father's Day?