“Our whole life is solving puzzles...We turn the cube and it twists us...A good puzzle, it's a fair thing. Nobody is lying. It's very clear, and the problem depends just on you…" ~~ Ernő Rubik, Hungarian inventor, architect and professor of architecture; Inventor of Rubik's Cube (1974), Rubik's Magic, Rubik's Magic: Master Edition, Rubik's Snake. 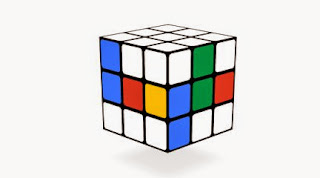 Rubik made the original prototypes of his cube by hand, making tiny holes in blocks of wood, threading rubber bands through them for holding the cubes together.

Ideal's major branding strategy was to have a unique identity for the cube, and appropriately named it after its inventor, Rubik, in 1980 and "Rubik's Cube" began mass market production.

According to a recent Europa article, Rubik's influencers include Leonardo da Vinci who Rubik regards as the Renaissance man, Michelangelo who he respects as a polymath painter, sculptor, and architect, M.C. Escher, an artist who built impossible constructions and grappled with the explorations of infinity. Philosophers and writers Rubik admires are Voltaire, Stendhal, Thomas Mann, Jean-Paul Sartre, Hungarian poet Attila József, Jules Verne and Isaac Asimov. In the field of architecture, Rubik is an admirer of Frank Lloyd Wright and Le Corbusier.

A standard Rubik's Cube measures about 2¼ inches on each side and is comprised of twenty-six unique miniature cubes, known as "cubies" or "cubelets." Each of these tiny cubies includes a hidden cubie inside that interlocks with the other interlocking cubes. 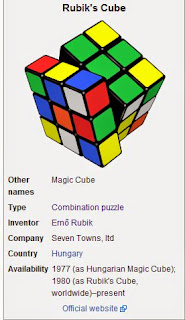 This enables a user to move them around in different locations to create the ideal pattern -- all of the same colors on each of the total 6 external sides of the cube.

A single core piece consists of three intersecting axes holding the six center squares in place but letting them rotate, and twenty smaller plastic pieces which fit into it to form the assembled puzzle.

@GBDaly
Please visit this blog frequently and share with your social media. Thanks.
Posted by Gloria Buono-Daly at 9:00 PM