Ad spending during the Super Bowl games has always been a huge topic not only for the creative content but controversy over the cost of the ads. To think that a 30 second ad sold for roughly $42,000 (Super Bowl I in 1967) and now 48 years later the cost for a 30 second spot for Super Bowl XLVIII is $4 million, with a few advertisers paying up to $4.5 million. This represents an increase of 9,423%.

The spreadsheet below lists Super Bowl ad prices for a 30 second spot over the past 48 year Super Bowl history (from it's first in 1967 through the 48th in 2014). As of Jan. 25, the spreadsheet has been updated with the respective national TV network airing that Super Bowl year (see the last column to the right of spreadsheet below). For those interested in a PDF version, a link will be available shortly or you may email me at gmbdaly [at] gmail [dot] com. 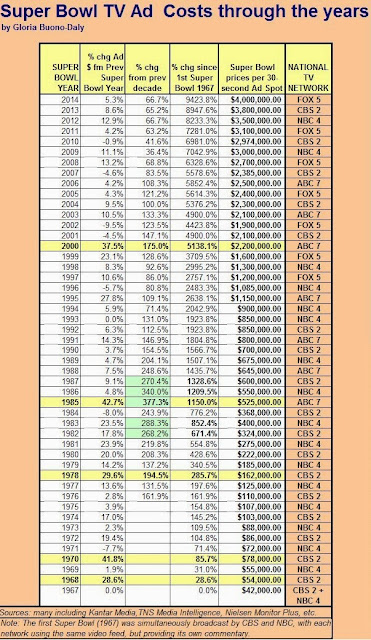 I wonder what this tells us about our economy. What do you think it means for the future of Super Bowl TV ad rates? According to a recent BusinessWeek blog by Eric Chemi, Super Bowl Ad Insanity Explained in Six Charts, assuming the average growth rate continues into the future,"my take is that rates can potentially reach $6 million in the 2020s, $8 million in the 2030s, and $10 million by 2040" says Chemi. 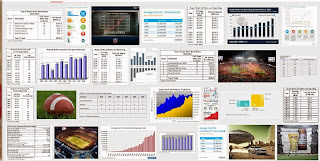 Super Bowl Sunday, known as the biggest advertising day of the year will reach well over $2 billion ad spending over the past 12 years (from 2003 - 2014).

Stay tuned for my next blog which will include the Super Bowl XLVIII 2014 $ Ad Spend Grid.

The usual big ad players --Pepsi and Budweiser (Anheuser Bush)-- along with popular brands Toyota and Volkswagen -- are returning to the game but many in it for several years such as E*TRADE, Cars.com, GM Ford, and Subway are all out this year.

What do you think? Are the Super Bowl TV ads generating enough awareness and momentum for a brand? Can the $4 million price per 30 second TV ad be the reason why big brand, repeat advertisers are pulling out this year?