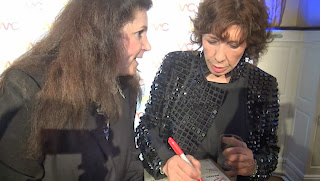 "A toast to the founders of WMC -- these 3 goddesses who have been raising hell through raising consciousness."
~~ Lily Tomlin , host of the Women’s Media Center 2013 Women’s Media Awards font> , American actress, comedian, writer, and producer and major force in American comedy, on WMC Co-founders -- Gloria Steinem, Jane Fonda and Robin Morgan -- as quoted during the WMC Women's Media Awards gala at 853 Park Avenue in New York City, October 8, 2013. 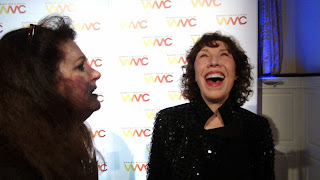 Photos above left, and to the right of Lily Tomlin by Gloria Buono-Daly. 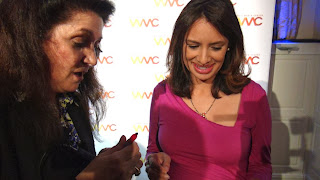 Co-founders Gloria Steinem, Jane Fonda and Robin Morgan were among the presenters. 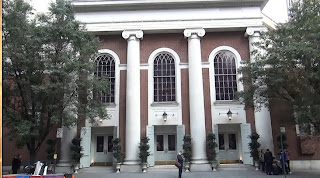 The full house event held at 583 Park Avenue, a spectacular venue on 63rd and Park Avenue in New York City is charmed with magnificent motifs and architecture reminiscent of the bygone era. 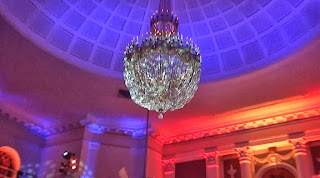 This event marks the 5th annual awards celebration which recognizes individuals who have made outstanding contributions to advancing women’s and girls’ visibility and power in media. 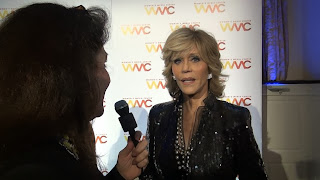 "Social media has brought news and differing perspectives to the world and changed the conversation...It is where the power to make significant change exists today," said Fonda. 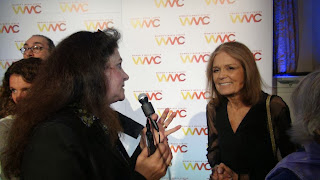 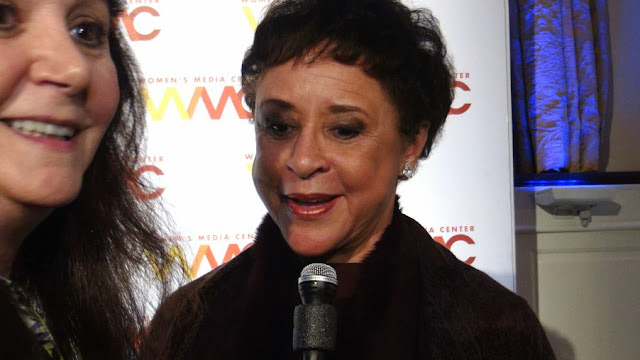 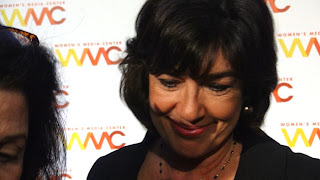 
Photo below left of Robin Morgan by Gloria Buono-Daly. 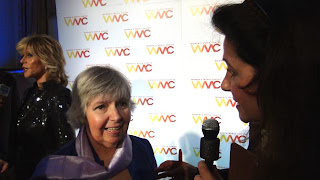 "… Well firstly it is a great honor to be receiving the award in honor of Pat Mitchell who use to be variously a boss, a colleague and she’s always a friend…she really is a trail blazer in the field of women and certainly women in media … My greatest pride is twofold, one, that I started at CNN right out of college in 1983 (30 years ago this month) and I worked my way up from the very bottom and … I’m proud of that because that has centered me and has given me a sense of passion and mission and commitment … It also means that I don’t think easy come easy go … I know how hard it is to get to the top of your profession and to stay there and to use it in a responsible way ... To be competent you have to really work and really practice…My greatest, greatest pride though is the work I did along with my CNN teams in Bosnia during the 90s … we were young, we were inexperienced, we were green, we didn’t realize what we were being thrown into, which turned into ethnic cleansing and genocide, in Europe at the end of the 20th century in the midst of the satellite revolution nobody could say we didn’t know. We were there to tell the world what was going on and by force of telling the story and thank goodness our networks played it every single day it was really top of the news on CNN just about for years… It was stunning and I believe we did the right thing in terms of journalism, in terms of the moral imperative, and finally I believe the force of the weight of history that our democratic leaders were forced to confront got them to intervene … and Bosnia today is free, it’s independent, and it is no longer in the throes of a genocide war. That is really important. ” My greatest regret for myself for my myself, for my colleagues and leaders is not intervening in Rowanda …"
~~ Christiane Amanpour Women’s Media Center 2013 Pat Mitchell Life Time Achievement Women’s Media Award recipient, ,as quoted on Robin Morgan’s Pre-Women’s Media Center Awards Gala show, on her greatest pride and regret; Amanpour is one of the worlds leading news correspondents, CNN Chief International Correspondent, This Week, ABC News Anchor 9 Emmy Awards including a Peabody Award.

"I wanted to give black Americans a voice…a way of telling our stories…and we are loosing our voice. You are seeing fewer and fewer African American anchors telling our stories. That’s the reason I did “The Butler … We need more stories and news shows to start the conversation again of the issues facing black America because this is what we’ve lost."
~~ Sheila Johnson Visionary Role Model and Corporate Leader, 2013 Women’s Media Award recipient, Founding Partner of Black Entertainment Television; CEO of Salamander Hotels and Resorts; Vice Chairman of Monumental Sports & Entertainment and President and Managing Partner of the WNBA’s Washington Mystics. First and only African-American woman to have ownership in three professional sports teams, including the NBA’s Washington Wizards and the NHL’s Washington Capitals; Executive Producer of four documentary films including Kicking It, A Powerful Noise, She Is the Matador, The Other City and Executive Producer of the newly released feature film Lee Daniels' The Butler , Johnson's comments concerning her disappointment of what the company she founded, BET (Black Entertainment Television) has become after she sold it, as quoted on Robin Morgan’s Pre-Women’s Media Center Awards Gala show.


This article will be updated regularly with photos, videos of interviews and other related information. Please visit frequently and subscribe to our RSS feed. Thanks.

Very exciting, this year to have the opportunity to interview Co-Founders Jane Fonda, Gloria Steinem and Robin Morgan, host Lily Tomlin as well as all 3 honorees -- Christiane Amanpour, Sheila Johnson and Maria Teresa Kumar along with many other special guests including Tamsen Fadal, Stacey Tisdale, Kathleen Turner, etc.


The Women’s Media Center – founded by Jane Fonda, Robin Morgan and Gloria Steinem – works to make women and girls visible and powerful in the media. The influence of the media is the most powerful economic and cultural force today. By deciding who gets to talk, what shapes the debate, who writes and what is important enough to report, the media shapes our understanding of who we are and what we do.
Posted by Gloria Buono-Daly at 7:07 PM