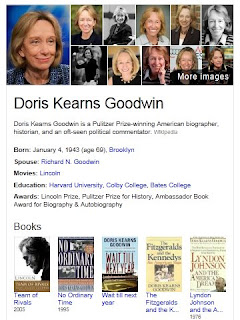 “When I got married and had my kids I was at that time still teaching. I realized I couldn’t be a professor and write and be a mother at the same time. So I decided to give up being a professor even though that was my identity for over 10 years. I decided to take a risk to write and that turned out being the right decision. But it really meant that I could write and be with the kids.”
~~ Doris Kearns Goodwin Pulitzer Prize-winning American biographer, acclaimed historian and renown political commentator; As quoted on April 19, 2010 while answering the allthingsdigitalmarketing.com question of the day at The 40th Annual Matrix Awards 2010 in New York City -- "What was the most important decision you have ever made and why?"

Happy B-Day to Doris Kearns Goodwin, Pulitzer Prize-winning American biographer, acclaimed historian, and popular political commentator. She has written biographies of several U.S. Presidents, including Lyndon Johnson and the American Dream; The Fitzgeralds and the Kennedys: An American Saga; No Ordinary Time: Franklin and Eleanor Roosevelt (which won the Pulitzer Prize for History in 1995); and her most recent book, Team of Rivals: The Political Genius of Abraham Lincoln.

In 1967, during the Lyndon B. Johnson administration, Kearns went to Washington, D.C., as a White House Fellow. Johnson offered Kearns a job as his assistant, even after an article by Kearns appeared in The New Republic laying out a scenario for Johnson's removal from office over his conduct of the war in Vietnam, the offer was not withdrawn.

After Johnson left office in 1969, Kearns taught government at Harvard for ten years, including a course on the American presidency. During this period she also assisted Johnson in drafting his memoirs. Her first book, Lyndon Johnson and the American Dream, which drew upon her conversations with the late president, was published in 1977. It became a New York Times bestseller and provided a launching pad for her literary career.

Interesting trivia about Goodwin was that sometime in 1993 - 1994 she became the first female journalist to enter the Boston Red Sox locker room. She consulted on and appeared in Ken Burns's 1994 documentary, Baseball.

Goodwin won the Pulitzer Prize in 1995 for No Ordinary Time: Franklin and Eleanor Roosevelt: The American Homefront During World War II.

Goodwin is currently working on her next book which will be about Theodore Roosevelt, focusing on his relationship with William Howard Taft, the election of 1912 and the muckraking journalism of the Progressive era.

Stephen King met with Goodwin while he was writing his novel 11/22/63, due to her being an assistant to Johnson, and King used some of her ideas in the novel on what a worst-case scenario would be like if history had changed.

All photos courtesy of Wikimedia unless otherwise indicated.
Posted by Gloria Buono-Daly at 9:00 PM