"The most important career choice you'll make is who you marry."
-- Sheryl Sandberg 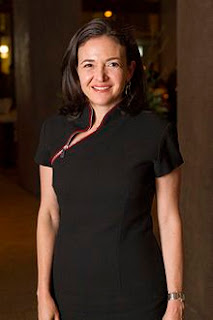 Two weeks ago, I was singing "At Last," in memory of the greatest woman's voice who ever lived, Etta James. (Incidentally, this was the song to our first dance at our wedding.)

Today it's "At Last," the highest paid employee at a major corporation, Facebook, is a woman! Second in command, Sheryl Sandberg could become one of the wealthiest self-made women in the world once the company goes public. According to Claudine Zap at Yahoo Shine, "Her salary and stock awards last year were $30.87 million."

When Facebook goes public Sandberg will become a billionaire; Yet she admits that she can't succeed alone. "We need women at all levels, including the top, to change the dynamic, reshape the conversation, to make sure women's voices are heard and heeded, not overlooked and ignored." said Sandberg in a commencement address to Barnard College graduates.

More information at the following links:

Sheryl Sandberg Was Facebook’s Best-Paid Employee in 2011
http://mashable.com/2012/02/01/facebook-compensation/
Posted by Gloria Buono-Daly at 7:26 AM