Can you believe it's been 10 years?
Photo below, "The Falling Man," by Richard Drew. 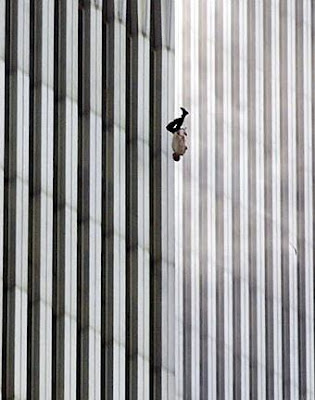 our
land, brave and free


Emotionally charged, mixed feelings - 2001 to 2011. From Poet Laureate, Billy Collins' prose commemorating all of the 9/11 victims, "The Names," posted below, to one of the most provocative, unforgettable images by Associated Press photographer Richard Drew, of a man falling from the twin towers, positioned perfectly in the middle. The photo was taken at about 9:41 am on 9/11/01 -- 15 minutes before the 1st building, the South tower, collapsed. Videos would show that the falling man was actually a tumbling man in the air and this is one moment in his time that was captured. Note how perfectly straight, positioned in the middle and parallel to the burning towers the falling man is. The above photo was branded distasteful and voyeuristic -- never to be shown again, yet the incredible "falling man" is still around.

According to many articles and documentaries, there were about 200 people who jumped to their deaths, some were able to be identified only for the victim’s families and to provide closure for them. But there was no time to recover or identify those who were forced to jump prior to the collapse of the towers. We lost almost 3,000 lives that day.

Where were you on 9/11/2001?
I was working on Wall Street( on the corner of Wall and Water Streets). It was a beautiful, clear skied morning. I arrived early as I usually do and was at my desk on the computer when I heard a loud bang and felt rumbling underneath my desk at 8:46 a.m. I shouted "What was that?" Then 15 minutes later another bang, as some fellow employees arrived - initially we thought it was from a missile. Hard to imagine it would be the biggest single attack on American lives. I still keep on asking myself "how could this be?" I was curious and ran outside to see what was happening. As I was walking on Water St. and reached Liberty St., it was at about 10:00 am, I saw large billows of gray smoke, appearing to turn day to night, enveloping hundreds if not thousands of people running for their lives – apparently heading towards the river. I asked some folks what is happening and most were in such shock. With all the commotion, all they could say while they were running was “it’s down, it’s down.” At that moment, I thought another plane came down. I ran back to the office and learned from colleagues that the South tower collapsed (incidentally, this was the 2nd building hit). The North tower (1st building hit) collapsed at about 30 minutes later. And the world would never be the same.

"The Names" poem by Billy Collins posted below:
Yesterday, I lay awake in the palm of the night.
A soft rain stole in, unhelped by any breeze,
And when I saw the silver glaze on the windows,
I started with A, with Ackerman, as it happened,
Then Baxter and Calabro,
Davis and Eberling, names falling into place
As droplets fell through the dark.
Names printed on the ceiling of the night.
Names slipping around a watery bend.
Twenty-six willows on the banks of a stream.
In the morning, I walked out barefoot
Among thousands of flowers
Heavy with dew like the eyes of tears,
And each had a name --
Fiori inscribed on a yellow petal
Then Gonzalez and Han, Ishikawa and Jenkins.
Names written in the air
And stitched into the cloth of the day.
A name under a photograph taped to a mailbox.
Monogram on a torn shirt,
I see you spelled out on storefront windows
And on the bright unfurled awnings of this city.
I say the syllables as I turn a corner --
Kelly and Lee,
Medina, Nardella, and O'Connor.
When I peer into the woods,
I see a thick tangle where letters are hidden
As in a puzzle concocted for children.
Parker and Quigley in the twigs of an ash,
Rizzo, Schubert, Torres, and Upton,
Secrets in the boughs of an ancient maple.
Names written in the pale sky.
Names rising in the updraft amid buildings.
Names silent in stone
Or cried out behind a door.
Names blown over the earth and out to sea.
In the evening -- weakening light, the last swallows.
A boy on a lake lifts his oars.
A woman by a window puts a match to a candle,
And the names are outlined on the rose clouds --
Vanacore and Wallace,
(let X stand, if it can, for the ones unfound)
Then Young and Ziminsky, the final jolt of Z.
Names etched on the head of a pin.
One name spanning a bridge, another undergoing a tunnel.
A blue name needled into the skin.
Names of citizens, workers, mothers and fathers,
The bright-eyed daughter, the quick son.
Alphabet of names in a green field.
Names in the small tracks of birds.
Names lifted from a hat
Or balanced on the tip of the tongue.
Names wheeled into the dim warehouse of memory.
So many names, there is barely room on the walls of the heart