Another B-Day surprise!
Did you know that today, September 27th, 2011, Google celebrates being a teen? Happy 13TH B-DAY again! Many of us have already celebrated 23 days earlier (September 4th). Although Google officially became incorporated on September 4th, they decided to have their official B-Day on September 27th. Check out their adorable Doodle, more suitable for a baby shower than for a 13th birthday, but still adorable. 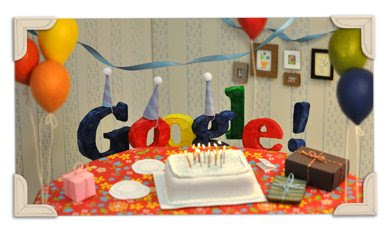 More information including all of Google's past B-Day Doodles can be seen at this SearchEngineWatch article.

Here's my earlier blog celebrating Google's 13th.
Surprise to Google who turned 13 years old today (9/4/2011). And I am surprised that Google didn't post its very own Happy 13 B-Day doodle! Since I couldn't find one on the internet, I thought you'd enjoy my "Google Rocks 13th B-Day" doodle rendition (below).

So let's all celebrate the day Google became a teen. Ever since Google was born (September 4, 1998), there have been whirlwinds of internet momentum, controversary, and innovation. Google rocks and doesn't appear to be slowing down any time soon. 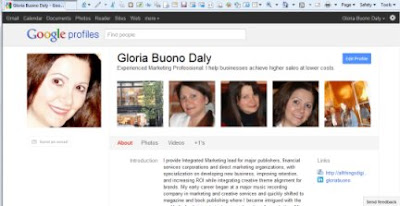 To think it took Larry Page and Sergey Brin less than 2 years to incorporate Google -- in 1996, both were PhD students at Stanford University, working on a research project when Yahoo! and AOL were the major search engines.

Thirteen years later Google has embarked on hundreds, if not thousands of innovations, ventures and acquisitions. Below is a brief timeline of my most notable Google milestones (note clicking on the table below, and then once again, will enlarge for viewing): This chart will be updated regularly, do bookmark and visit frequently.

Happy Birthday Google: Making Sense of the Web for 13 Years by Stephanie Buck, writer at Mashable.com
Posted by Gloria Buono-Daly at 6:57 PM