Monday Night at The Paley Center for Media: Guess Who Got Re-Elected? 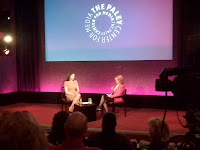 “Geena Davis on screen and off! Tonight’s conversation is bound to be inspiring for all”  Mitchell praised as she introduced Geena Davis. Besides summarizing Davis’ remarkable career of iconic roles in TV including Buffalo Bill and Commander in Chief, and films Tootsie, Beetle Juice, A League of Their Own, The Accidental Tourist, where she received her Oscar, followed by the iconic Thelma and Louise, where she (with Susan Sarandan) was nominated for a second Oscar for best actress, only a few years after receiving her first Oscar.

Highlights of the evening included a discussion about the impact of Geena Davis' life on winning her first Oscar for The Accidental Tourist to her various iconic roles. Also discussed were barriers in the entertainment industry for women and young girls, particularly the disturbing gender gap of women in media. Davis' goal is to make sure that the awareness of gender gap issues continues to increase and that people continue to see the vast differences of roles for girls and boys in media and become involved.

In 2007 there were only 2.7% female film directors employed. Davis was aware of women parts from amazing women who have paved the way such as Meryl Streep, Jessica Lange, Sally Field and Glenn Close, but it wasn’t until her daughter was about 2 years old and they were watching kids programs that she noticed gender disparity directed at little kids.

The characterizations were so sexualized that she found it disturbing and prompted her to start The Geena Davis Institute on Gender in Media. In a very short time, her organization has compiled the largest research on G-rated films and TV programs made for children. Among her research findings are the many producers, writers, and directors that weren’t aware of gender disparities. Her goal is to reach all movie makers of children’s programs (i.e., writers, producers, directors, casting directors, etc.) and discuss the choices being made right there on the sets.

Her institute has several research projects in the works and they are going to be more qualitative than quantiative and will focus more on the top grossing G-rated movies from 2006 through the present. They will interview the film and TV executives to see if they are aware of the gender disparity issues and learn what they think.

Of great concern to many women is the fact that there aren't enough female action-hero movies, and there is a need for more diverse portrayals of females and males in Film and TV entertainment for children. According to research from The Geena Davis Institute on Gender in Media, the ratio of girls to boys of 1:3 has never improved and has been the same since 1946 (a span of 64 years). “It never gets better, the psyche of people in Hollywood believes women will watch men but men won’t watch women,” Davis concludes. According to her research 70% of those interviewed believe female character roles are boring.

Davis feels that it takes consciousness to make changes in gender disparity, and  that it's not just about having equal amounts of boys and girls. Davis illustrated this by her recollection of a boat race scene in Stuart Little where the director for casting extras placed the boy extras with the boat remotes in the front and positioned all of the girls behind the boys to watch. “I looked and asked, can you give half of the remotes to the girls?” said Davis. “And he said, yeah,” Davis added.

The alarming issue of hyper-sexuality in film and tv was discussed and the conclusion of how the vast majority of 13 year old girls occupied with watching this is eye candy. "Hot characters in a G-rated movie makes me cringe, what does my daughter think? And that's all 13 year old females can do?" a deeply concerned Davis added.  Other findings from her research indicated that the number 1 aspiration by lead female characters in film and tv is romance and that the only two career goals for women were entertainment and royalty. "It's very hard to get jobs in royalty," said Davis. A compelling correlation of hours spent watching TV for girls and boys was discussed.  The more hours that girls watch TV the less options they feel they have in life. For males, the more they watch TV the more sexist they feel.

Another alarming trend had to do with the fact that sex-revealing clothes worn by girls in G-rated movies were the same as the clothing worn in R-rated programs. Davis believes that in order to improve children's images in movies and TV, the most impact for girls is going to be in the secondary and tertiary characters. Getting more movies about female characters, taking parts and switching them around so that more females are involved in the action is key to confronting gender disparity in children.

Topics about the importance of having more women portrayed in senior leadership roles on TV and Film were also addressed.  “Your iconic TV role as first female President of the United States, Mackenzie Allen, in Commander in Chief, which was #1 until Fox’s American Idol aired. I wonder what was running through your head” a curious Mitchell asked. It was very obvious that Davis had a tremendous fondness for that role and admitted being disappointed about the show’s short run. “I mean you can’t get more iconic than playing that role; What else am I suppose to do? Play a waitress? I’m the President,” said Davis. “Actually I took this role right after playing a parent on The Rosie Show,” Davis added as the audience laughed.

Commander in Chief, was #1 on Tuesday nights until FOX's American Idol aired. Davis provided compelling evidence and statistics of the big impact this show had even with it’s short TV life.

According to a media research study done by The Kaplan Thaler Group, people who didn’t even watch the program and who were just familiar with the show were 58% more likely to vote for a female President. “That was just during our short season and shows how powerful that show really was,” says Davis. “Imagine if we had 2, 3, or 4 seasons, we might have had a female President,” surmised Mitchell.

When Davis was asked if there was anything that we, the consumers could have done to help keep Commander in Chief on the air Davis replied that despite all of the letters and correspondence, it would have been difficult to get the advertisers’ buy in. “Actually I have been trying to get the show back on Cable TV, “an optimistic Davis said. “And here’s the ad -- a silhouette of me and the caption -- Guess who got re-elected?”

The audience viewed an excerpt of her ground breaking movie, The Accidental Tourist, the dog walking scene. “Other than cruelty to animals did you expect that The Accidental Tourist would be the ground-breaking role that would win you the Academy Award?” asked Mitchell. “I read the book and thought how much I want to play that part. I was fairly naive about how things worked in those days, “ replied Davis.

Davis then described how the characters she had been most attracted to were complicated, multidimensional women who were in charge of their own destiny yet couldn't articulate their desires. “I always wanted to play very active parts, and I’m lucky that I wasn’t financially obliged to take parts I didn’t want to,” says Davis.

For many women winning the Oscar actually limited their careers but for Davis it was filled with moments of defying all odds. Winning her first Academy Award was very affirming. She was not sure how much it opened doors for her, instead she felt recognition and relaxation. “Kickback!  It gave me a sense that the pressure was off and it actually had a calming effect,” says Davis. Davis mentioned how profoundly educational her Oscar experience was as she personally never appreciated the media and then was struck by how so few opportunities there are that can make you feel this way. “It had a big impact on me and my future choices,” said Davis.

Throughout the provocative discussion, the audience received a lot of take-aways; besides Davis' charm, brilliance and sense of humor the audience witnessed surprise, delightful insights such as knowing one of Davis’ favorite quotes from her films. As the audience viewed an excerpt from the film, Thelma and Louise, the scene where the policeman gets forced into the trunk while pleading with them that he has a wife and kids. Louise (Geena Davis) with gun in hand replies “You’re lucky. You be sweet to them especially to your wife. My husband wasn’t sweet to me, look how I turned out?”

The discussion was followed by a series of Q and A ranging from the recent female ski olympians and hypersexuality in the media (i.e., Sports Illustrated bathing suit issue), perceptions of senior women leaders and executives in media to information on how to access data from her research and if her research is done around the world.  Interestingly, her organization researched 30 other countries and found that they shared similar concerns regarding gender disparity and hypersexuality. Surprisingly, 80% of international movies are made in America, and we are responsible for the vast amount of female stereotyping in film all around the world. In Mitchell's closing she shared her thoughts with the audience that Davis' ability to impact the world on this topic is such a big subject that she needs to return. Let's stay tuned for Part II.